We were blown away by the first episode of Telltale Games' episodic adventure set in Gearbox Software's colourful and eclectic sci-fi universe. It offered more humour than Telltale had been putting out in recent years, and the narrative device of two main characters taking turns telling their part of the story was brilliant.

Speaking of that the device. The game starts off with Rhys and Fiona, one a Hyperion clerk, the other a con artist, having been captured by a mysterious stranger asking them to retell a story of how they went out to seek the treasures of a vault. It's a brilliant device as the player will play as both Rhys and Fiona, providing different perspectives on the events. At the start of the game this is played up a bit, with Rhys in particular exaggerating his part, but as the season progresses the storytelling is more to the point with less of that "big fish tale" element to it. That's not to say things aren't epic, it's just that Rhys and Fiona do less embellishing. It's a shame, but as you arrive at the end you'll realise where Rhys and Fiona were able to embellish and where their captor would have stopped them from going too wild.

It's difficult to take you through the many twists and turns of the story, but it starts out as a simple con that somehow turns into a proper vault hunt. In many ways the hunt is secondary to the characters you run into and the relationship between both heroes, villains and side characters. Without spoiling anything we can confirm that your actions and choices have a more substantial payoff towards the end of the game than what is usually the case with games of this type.

There's a lot of memorable characters in Tales from the Borderlands, and we particularly enjoyed some of the side cast. Scooter, Loader Bot, Gortys, and Vaughn come to mind. And of course, there is Handsome Jack, but if you were to ask him we're pretty sure he'd say he was the main character. There's a ton of characters appearing as short cameos or for longer spells, and the colourful cast helps support the tremendous pace of the narrative.

Speaking of colourful, while technically rather basic the design on display here is glorious and Telltale's style marries perfectly with the cel-shaded and exaggerated aesthetics of Borderlands. At times it feels a bit too basic, such as when ropes disappear into thin air as a knife touches them and so on. It almost comes off as a bit cheap, although it sort of works here, but hopefully these are the last few Telltale seasons that are held back by being developed for older platforms as well as new-gen consoles. As you'd expect there's some great voice work applied to the game and we really enjoyed the music video style intros (sort of, they didn't always arrive at the start of the episode) where Telltale really got to show off some over-the-top stunts and set the mood for the upcoming chapters.

We played the game on Xbox One and noticed some technical shortcomings as the frame-rate stuttered from time to time, and load times were a bit excessive (considering the rather limited environments found in the game). At one point the sound also cut out in episode 4. Not enough to detract from the overall experience, but annoying nonetheless.

Compared to other similar games Tales from the Borderlands keeps a high pace throughout. At times things happen so quickly it turns into a blur, and as we were made to wait 2-3 months for each episode it made things even more obscure. We did play the last few episodes in one go, and that was a superior experience to playing it one episode at a time. Now that all episodes are out that's definitely how you should experience the game. The high pace comes with both positives and negatives. It never feels like the story slumps, but there isn't a lot to explore on the side and there are more quick time events here than we would have liked to have seen. Sure some of these are more involved than just pressing and swiping as you'll have to aim as well, but it was a bit much in places.

There are some other mechanics, such as Rhys' ability to scan objects with his eye and there was even a bit of looting. But truth be told these mechanics are never fully explored and it seems Telltale Games doesn't want to design proper mini-games that are rewarding in themselves even when the opportunity is clearly there (such as when Rhys is hacking).

Tales from the Borderlands is an interesting spin-off on Gearbox Software's popular loot 'em up. It is also an interesting and rather extreme variant on the Telltale formula. In our opinion it's a great fit for the fiction, but if you're expecting a game with puzzles and areas to explore you'll be sorely disappointed. This is a high-paced branching narrative with lots of colourful characters, some choices to make and entertaining dialogue to take in.

Advertisements
Gamereactor UK
+
Great characters and dialogue, Very high-paced narrative, Brilliant voice work and "music videos", Visual design impresses.
-
Some technical issues (played on Xbox One), Looks a bit old technically, Some people will be put off by the heavy reliance on Quick Time Events.
is our network score. What's yours? The network score is the average of every country's score 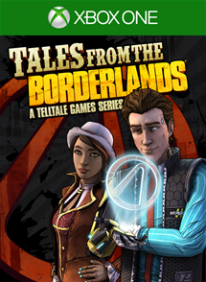