The Digital Deluxe Edition of the game comes with four pieces of DLC (these can also be purchased separately) and it gives owners access to the game four days earlier. This DLC includes six classic character skins, three legendary console skins, ten customisable items, and the game's soundtrack. Those who pre-order can also grab 10 exclusive items.

The physical edition of the game, which can be viewed below, contains a 40-page art book, a reversible cover, and 10 exclusive items. The items included within this edition appear to be the same as the ones granted for pre-ordering the Digital Deluxe Edition.

Super Monkey Ball: Banana Mania is set to release on October 5, 2021, on Nintendo Switch, PC, PS4, PS5, Xbox One, and Xbox Series. Pre-orders for the physical and digital editions are now open.

The faithful remaster will be launching this October.

A Digital Deluxe Edition has also been revealed and this includes four pieces of DLC. 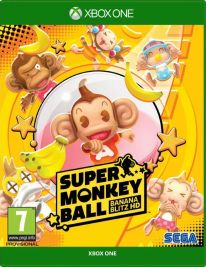