The original Super Meat Boy, developed by Team Meat is one of the greatest indie platformers to ever grace the industry. It's combination of brutal challenges and adorably weird characters made for an experience unlike no other. So, when we were told that it would be receiving a sequel, we were pretty excited to see what Team Meat had up their sleeves. But, after spending some time with Super Meat Boy Forever (the sequel), it often sadly didn't live up to our high expectations.

Following on from the events of Super Meat Boy, Super Meat Boy Forever sees Meat Boy and Bandage Girl starting a family, even having a child called Nugget. This odd little creature looks to be a meat cube wrapped in a pink bandage rabbit onesie and has the signature curiosity of its parents. All is going well for the new family until Dr. Fetus (who we are once again routinely reminded is not a doctor) shows up, snatching Nugget away from Meat Boy and Bandage Girl, as he looks for creative and absurd ways to cause immeasurable pain to the iconic characters - as we have come to expect from the series.

Alike its predecessor, Super Meat Boy Forever is a platformer, except it is also an auto-runner. You will be expected to perform a lot of the similar styles of brutal platforming, but at the same time, your approach will have to be a little less creative, as you cannot stop Meat Boy from running at any point. You can get Meat Boy to jump, slide, punch/kick, dash and even wall-jump, all with only two buttons and that's because the majority of movement is already in place from the get-go.

The difficulty because of this is strangely spiked as parts of the game are simple to complete, barely posing a challenge at all, whereas other areas are the sort of challenge originating from your deepest nightmares. But, here's the really weird part. The reason for this difficulty difference is due to the randomly generated levels that are created based on how successful a player is throughout previous levels.

It's a bizarre design that could see you face either immensely difficult maps should you be a Super Meat Boy god, or the polar opposite if platforming isn't really your jam. From my experience, the levels are neither too easy or too hard, they instead fluctuate between incredibly challenging areas in a level, and parts where there is no challenge at all. It's a very peculiar dynamic.

On a brighter note, the level design and different locations throughout the game are once again incredible. Each level is unique and built with a separate style of challenge or look to keep gameplay feeling fresh. On top of this, whether you are in the woodland Chipper Grove or at the destroyed Clinic, the worlds always feel entertaining, albeit a little creepy.

There are again enemies to deal with, such as blue fly looking creatures, although considering the auto-running design these foes aren't very challenging and are mainly used as a method to get a second dash attack to cover large gaps. On the other hand, the bosses are pretty unique and will require patience and strategy to defeat. Strangely enough, this is where the auto-running design actually makes gameplay a little more interesting, as you can't stop to assess the situation - you have to keep running.

Fans of the original Super Meat Boy will be glad to hear that Super Meat Boy Forever does feature the Dark World for some extra more challenging levels, as well as various characters to unlock and play to give the game that extra little bit of personality. Frankly, all of these features feel pretty necessary considering the five main worlds only have around seven levels to complete each. Granted, they're not all walks in the park, and many of them will fill you with that burning rage the original Super Meat Boy nailed over ten years ago, but it is something worth being aware of.

Personally, two of my favourite areas of Super Meat Boy Forever are the soundtrack and visual design. This game looks amazing, and the cartoony art direction often keeps the brutality humourous (I promise, I'm not a psychopath), but it's the soundtrack that hammers home this vicious game. The heavy metal music is perfect for getting your blood pumping without a moment's notice, and even though I don't find this game as difficult as its predecessor, you will need a hefty dose of adrenaline to keep you motivated to get you through the challenges it poses.

Looking at the title as a whole, Super Meat Boy Forever is not a bad game in any sense. It's just not quite the game we were expecting, and while there is a lot to love, compared to the original, it just doesn't have the same flair. Super Meat Boy was an instant hit and expecting no less than something similar from Team Meat is really quite unfair in this sequel, but I just really can't shake the reasoning for the auto-run design. Sure, this game was set to be a mobile title, but it's now out on pretty much every major platform (new-gen through backwards compatibility), and considering we've waited over ten years now, it also doesn't seem unreasonable to want a little more.

As Super Meat Boy Forever is available for £15.99 / €15.99, it's a pretty fun indie title to pick up and pull your hair out over. The art and sound design is great and the gameplay is tight considering it's unusual style, just know that if you are expecting a game to live up to the success of what Super Meat Boy achieved - this probably won't do that for you.

Advertisements
Gamereactor UK
+
The game looks great and the soundtrack is awesome. Gameplay is also incredibly tight with very, very infrequent bugs.
-
Auto-run design makes gameplay feel lacklustre at times. Doesn't live up to the success of the original Super Meat Boy.
is our network score. What's yours? The network score is the average of every country's score

We're set for two hours of fun with the sequel to Team Meat's iconic indie.

Even Nintendo want its players to have a bloody holiday.

Super Meat Boy Forever delayed but won't be "too long"

The highly anticipated sequel to the 2010 brutal platformer Super Meat Boy has been delayed.

We had a chat about cruel difficulty settings, cutscenes and using one's feet to play games with Team Meat CEO Tommy Refenes at PAX East.

Super Meat Boy Forever: "you can do a lot with two buttons"

Super Meat Boy Forever official and heading to all platforms

The sequel to the über-hard platformer will launch in 2018 and it's got a first trailer. 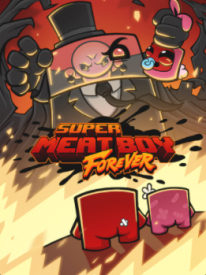