The Nintendo Switch in the last year and a bit has become the home for a lot of successful ideas and concepts, and at first glance one would think Super Mario Party is the perfect fit for the hybrid console. After all, it encourages easy multiplayer and getting people together wherever and whenever, but how does all of this fare when pup into practice?

It didn't start off amazingly well, as after a rather uninspiring loading screen, the first thing the game asks for is for a fixed number of players and consoles to take part. The former would sound totally normal on a regular domestic console, but on a hybrid system such as the Switch, it didn't feel like the most promising of starts, especially when we're talking about a game that's meant to casually bring groups of players together.

But our fears were proven wrong a few seconds later, as soon as we chose a team and our squad started marching on the screen with their usual playfulness. Much of Super Mario Party's charm comes from the cheerful and enjoyable tone surrounding the cutesy characters, the same tone that makes you feel some sort of compassion when a Koopa performs a botched play on the board, a moment that still managed to tug on our inner child's heartstrings.

And yes, the boards are back, as expected. However, for this party, they look back in time to the glory days of the series. It seems like the designers have listened to the community's feedback and requests, and that means dice are back and there are no group vehicles (meaning individual movement for each character). In fact, they even went the extra mile by adding something more interesting, meaning sessions are about more than just luck when throwing dice and moving through the squares.

The fact that every character now has their own special die adds some interesting weight and strategy to each throw, as well as the always-engaging risk and reward factor. If you choose Bowser, for example, you might be able to get a 10 with one throw, but his die also has the potential to remove coins. On top of this twist the addition of partners (who add their dice roll to yours), the greater number of items, and the stage-related events (like a bomb that can explode and rob you of coins) all add life to every play session, as these elements are able to turn the tide of the party in just a couple of turns. Combining dice throws with accompanying allies, trying to score the most wins at mini-games, buying more stars than the others, and above all trolling your rivals - these are the things that remind us exactly why Mario Party works so well, especially if you're playing with friends.

Even though there aren't many boards to choose from (four in total, one being unlockable), it's possible to play them in different ways thanks to the team-based mode. Handing a Joy-Con to another player for them to join forces with you, or even to a couple of people who can then form the rival team, is much more fun than just playing against the AI. Besides, the freedom of movement given here - as you can choose a path without having to follow pre-determined routes - is a change that might look simple on paper, but that actually gives you room for some pretty interesting tactics. This new feature succeeds at challenging the conventions of the series, although soon enough it made us think about the potential of online multiplayer which is once again sadly absent.

There's also a co-operative mode in the form of River Survival, and instead of working your way to get more coins and stars than your friends, you're working with them to paddle a boat downstream, with the comical use of a paddling motion as people on the right and left side of the boat work to navigate. The objective here is to pop balloons to trigger mini-games, which in turn earn you more time for your river expedition, adding a totally new approach to proceedings when compared to the board game.

Boards and modes aside, a good Mario Party needs first and foremost good mini-games, and it's here where Super Mario Party shines. It obviously might not be able to compete with the Mario Party: The Top 100 compilation in terms of quantity, but the 80 included deliver in terms of quality and variety, mostly in terms of how they take advantage of the Switch's unique features.

In other words, without the hybrid machine's special features, the lineup of cool and varied challenges included here would look rather different. Once you've played, you suddenly realise the reason behind forcing players to play with a single Joy-Con. The system's tiny controllers turn into magnifying glasses, guns, frying pans, water hoses, and even crystal jars. Most of them deftly use both the motion controls and the HD Rumble features, and a special mention needs to be made for the vibrating musical notes that sound when it's your turn. Some go for a more traditional control scheme with stick and buttons, but the very best games make you forget you're using a controller and ask you to think of it as an extension of yourself.

Given its nature, we have to talk about this game as something to be enjoyed in company. It's bigger and better when shared, as it encourages competition, cooperation, and even sometimes has you throwing a spanner in your team's works instead of pushing together. That's why we find it weird that online is limited to the Mariothon mode only - a series of mini-games played in order for max score. As the game includes other variants such as Adventures or Rhythm, why not allow those to be played online as well? Couch co-op and local multiplayer is, of course, the best way to enjoy this game, but sharing a similar experience over the Internet is the growing elephant in the room that Nintendo isn't willing to see.

But beyond that, the developer has managed to strike a good balance with the mini-games, and it has explored different gameplay mechanics that would be impossible without the unique hardware of the Switch. We haven't tested everything for obvious reasons, like those that ask you to own two consoles and lay their screens together, building dynamic two-screen tank battlefields or fruit-based puzzles. It's a unique and fresh concept that we'd like to see explored more deeply, but at the same time, we missed the Download Play feature present in many DS and 3DS games, which would let players share just one copy of the game.

All in all, thanks to its varied modes, the quality and quantity of its mini-games, and the experimental ideas that take advantage of the hardware's capabilities, Super Mario Party looks like the game the franchise needed to regain some of the freshness that has been lost over the years. It's a lot of fun to play with friends, and it'll even make big kids laugh until it hurts thanks to some crazy and comical mini-games. The king of the party is back, and his latest collection is indeed super.

HQ
Gamereactor UK
+
Perfect for Switch, Varied and numerous mini-games, Free roaming for two players needs to stay.
-
You can't drop-in, drop-out, More boards would be nice, Online is only supported by Mariothon.
is our network score. What's yours? The network score is the average of every country's score

Other improvements have been added like being able to invite a friend.

A digital pamphlet seems to suggest NDcube is looking to recruit for a new Mario Party adventure.

The Switch has got the party started.

And the party is just getting started.

Somebody really wanted to party early.

It's landing on Switch on October 5. 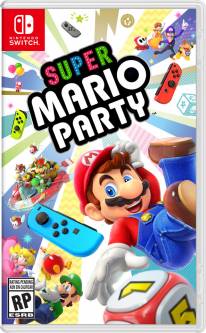