Nintendo's post-E3 event was full of surprises as titles that seemed lacklustre during the company's Direct clicked with us as soon as we got to tinker with them ourselves. We had the surreal experience of seeing the Mario & Luigi and Paper Mario universes colliding in Mario & Luigi: Paper Jam, watch Speedball 2 and Titanfall infect Metroid Prime in Federation Force game mode Blast Ball (3 vs. 3 piloted mechs try and shoot energy balls into goals and disable the other's side's rides) and go three-player co-op in Zelda.

Another enjoyable discovery was Super Mario Maker. The joke about Nintendo wanting fans to make their games for them started rolling before the title closed the company's Direct this year, but it had stained the concept somewhat. Looking at it, you wonder if it couldn't just be an additional mode attached to a bigger, fuller Mario game. You wonder just how much fun this could be.

As it turns out, it has potential. There are a number of modes seemingly built into the title - we're swatted away when we start playing a 10-Mario mode and face a stony silence when we ask about it - but for the moment we're steered towards the level creator and world play menus. The duo are interlinked; create a level in one and you can upload and share to let Mario Maker owners play it in the other. Players can ‘like' your creations, which feeds into a real-time leaderboard tracking community favourites. You can ‘follow' certain creators to keep track of their latest builds. Whether you can tinker further with someone else's build is not yet known.

We demo just one, and are immediately intrigued by what the top tier creators will come up with.

The level's start replicates that of the original Super Mario, but quickly builds in complexity. An early warp pipe seemingly drops you back to the start of the level, but the stage is now infested with larger enemies and foes stacked one on top of the other. The next warp lands you in a deathtrap full of rotating platforms and spinning fire columns that requires precise jumps only milliseconds apart to survive.

It's a quirky take on convention. We expect to see similar twists on the other Mario titles that can be used as template for level design. The creation tools are simpler than even Mario Paint's were. A drop down menu in the top left of the GamePad lets you click and pick from Super Mario Bros., Super Mario Bros.3, Super Mario World and New Super Mario Bros.. One tap and the game washes over what's on screen with your chosen title's look, and you can further filter the backgrounds to create underground caverns, Ghost Houses and the like.

Each game's physics are replicated, so one fiendish design's platform spacing may not automatically work in the others. You can drop Mario in anywhere on the map and start playing though to test each step, with every animation of your character's movements tracked and shown on pausing the build so you can more easily place ledges, Question Blocks or enemies on the exact position they need to go on the level grid. All are selectable from additional drop down menus that line the top bar of the GamePad screen, while alternating between different object types requires a swift ‘shake' of the stylus on the screen to flick between, say, different Koopa types. Merging objects is as simple as dragging one atop the other, letting you add mushrooms to Goombas to make them grow, or put wings on a Koopa to make them fly.

Stages have a maximum length, but you can have multiple stacks of them via connecting warp pipes, potentially letting you triple your level size or more (just remember to adjust the timer so players can finish the stage), and you can set the camera to either track the player or roll to the right, forcing them to keep up with it. The music's dictated by which Mario game and background tile you use for the level.

Nintendo's dip into the modding community is a left-field decision that's resulted in one of the more unique prospects for the Wii U. While the quality of the content is entirely dependent on just how good you and your fellow creators are with the tool set, we really hope there's some interaction with Nintendo's creators when the game releases. New levels designed by the them would be brilliant, but just getting a recommendation from Miyamoto or one of the Mario team for your creation would arguably be worth the asking price alone.

REVIEW. Written by David Caballero on the 2nd of September 2015 at 18

"Super Mario Maker is a masterpiece. It's a tribute and a lesson in 30 years of video game history."

Super Mario Maker 2 on Switch will not be affected.

The Flotilla Series has been bested.

Shaun The Sheep is coming to Super Mario Maker

Play the official level and get a Shaun costume.

Hello Kitty next in line for Super Mario Maker

It's the mash-up you've been waiting for. 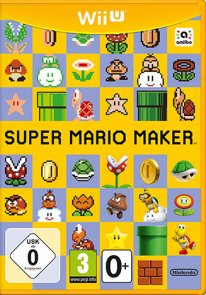