Super Mario Maker was undoubtedly one of the most important titles released on Nintendo Wii U last year, being a game that celebrated the 30th anniversary of Nintendo's iconic leading man, and that allowed players to create their own Super Mario levels for the very first time, letting their imagination and creativity run riot. The result was, of course, an unprecedented success, where the community has contributed greatly, filling Nintendo's servers with countless fascinating levels and, in many cases, some very difficult ones. For months, on the most popular streaming platforms such as Twitch and YouTube, we have watched players who accepted challenges and tried to achieve new records in the more complex levels.

In light of such a success, last September Nintendo decided to capitalise on it and announced Super Mario Maker for Nintendo 3DS, a portable version of this fascinating and creative masterpiece. However, as we have discovered, this game isn't a carbon copy of the original, instead it adds new features and improvements that makes it perfectly suited to portable play. Let's find out what these are, then.

As we already mentioned, being a portable version of the original game, much of Super Mario Maker's content has been completely redesigned in order to fit the handheld platform. It becomes clear when we start the game and we're introduced to the new tutorial feature, presented through interactive videos familiarising the player with the basic fundamentals of level design. Those interactive lessons are held by Mr. Yamamura - here a bizarre pigeon version of himself (yes, you read that right), and his able assistant, Mashiko. This is one of the most important differences we found compared to the Wii U version because, as you may recall, the latter offered a guide completely separate from the base game, where it was possible to learn some of the basics and even a few tricks to help when creating the perfect level. Obviously, if you are already an experienced level designer, you can safely skip this part and proceed to making your levels in the "Create" section.

The decision to include these interactive tutorials comes from the fact that Super Mario Maker for Nintendo 3DS aims to reach players of all levels, regardless of whether they are young, casual, or inexperienced, all the way up to seasoned veterans and Mario fanatics (and even experienced players can still learn some useful tricks that'll breathe new more life into their creations, thanks to the expert section).

Beside Yamamura's Lessons, there is a new challenge mode called Super Mario Challenge, a brand new mode that wasn't in the Wii U version. In this mode, which is well suited to the portable features of the 3DS and quick fix gaming, the player can face 18 worlds in order to rescue Princess Peach from Bowser. To progress you have to complete each level successfully, achieving a specific target. Once unlocked, you can also find the levels in Memobot mode, but we'll get to that later. When a player completes a level, they unlock not only a medal, but also a secondary objective. Each level, in fact, has two targets and, consequently, two medals to earn. As we said earlier, these objectives, once unlocked, merge in the Memobot mode, where you can play not only those you've unlocked in Challenge Mode, but you'll also find the levels created by you or shared with friends via Street Pass and locally.

While we're telling you about the content, just like the Wii U version, Super Mario Maker for Nintendo 3DS has a World Levels mode where you can find 100 Mario Challenge, which works exactly like its counterpart on home console, and there's also Recommended Levels. For both you can tackle a new, harder difficulty level. With these two modes, Super Mario Maker for Nintendo 3DS draws from the massive pool of content already present on the Wii U servers, however there are some exceptions. Some levels are extremely rich and complex in terms of detail and content, and so not all Wii U levels will be compatible on 3DS, but fortunately the pool of content from which we will draw will be more than enough. In the Recommended Levels category the most popular levels chosen by players are included, even if in this version the rating system has been removed. As a result, the most popular levels on 3DS are the most played levels on Wii U, and it also includes some levels selected by Nintendo itself.

Another important difference is related to the sharing system for the levels. Unlike the Wii U version, Super Mario Maker for Nintendo 3DS doesn't let players share their creations directly on Nintendo's servers; you're only able to do so via Street Pass and locally. This design choice comes down to the shift to handheld, with players not always having access to an internet connection. However, if you access World Levels, there's a useful Street Pass section that lets you share (send or receive) new levels from another player connected to that service.

As for the creation of levels - the real core of this experience - the system remains exactly the same as it was in the game on Wii U. We have the same tools we used in the original, with the difference (you will no doubt be pleased to hear) that about half of the available features are already available, while the remaining half will be unlocked by overcoming challenges within the game. Therefore, we won't have to wait this time around to get access to new tools and features to create levels. Another interesting aspect of this version is that there's no need to have completed and played your level before sharing it, rather the player to whom you send it will have the opportunity to intervene or change the level as he/she likes, and share it again with you.

Although initially sceptical of this adaptation for 3DS, we have to admit that we were quite enthusiastic about Super Mario Maker for Nintendo 3DS. The fact that Nintendo has reworked the original game to fit the platform, but has still kept it fun and fresh, is something we appreciated. Now we just have to put on our thinking caps and come up with some great concepts for own levels.

REVIEW. Written by Fabrizia Malgieri on the 30th of November 2016 at 14

"In our opinion it's even better suited to the portable platform than it was to the Wii U."

See what you can do in the 3DS version.

PREVIEW. Written by Fabrizia Malgieri on the 18th of November 2016 at 10

Nintendo releases a trailer showing four of the 100 new courses for the game.

No 3D in Super Mario Maker for Nintendo 3DS

The Wii U version is getting adapted. 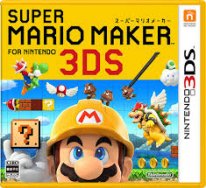