Super Mario isn't appealing to its many players solely because of its accessible mechanics or even Nintendo's family-friendly style. Each of the Italian plumber's classic 2D adventures has given birth to its own ROM community, letting people create wonderful and often absurdly difficult levels. Nowadays, however, if you bring unshakeable patience and can master some precise controls, Super Mario Maker is the best place for you to be a creative Mario fan. As with its predecessor, Nintendo has built a common platform for all of its passionate fans to create and share, and now after playing the second game on Switch, we've once again fallen in love.

Super Mario Maker 2 expands this central concept with a new-found focus on multiplayer, more tools, and increased possibilities for detail-loving architects, as well as a broader introduction to everything new players need to know. Now the game has a classic story mode, during which Nintendo demonstrates with great care the endless creative potential of its platformer. The premise is quite simple: the Undo Dog accidentally destroys Peach's castle and the Toad construction workers must rebuild it. Unfortunately, they lack the necessary cash, which is why we run and jump across more than 100 of Nintendo's tutorial levels. Not all of them are necessary to complete the game, however, you might find a few surprises if you're up to the task.

We want to praise how fantastic most of these missions are in terms of how they're designed. There are speedruns, puzzle levels, coin hunts, survival and precision challenges, as well as auto-scrolling and classic sidescrolling levels. Of course, the developers aren't as mean as the demanding community levels often tend to be - these courses are designed for a wide audience.

If a section is still too demanding, Luigi can help us with some handy items. We can use his items to damage boost Mario until the end of the course or let our green brother finish the level for us. In fact, this whole section of the game is only really there to explain the controls and give us a few ideas for our own courses. And yes, Nintendo needs this incredible range of examples to show those ideas off because there are five Mario generations in here.

At the heart of Super Mario Maker 2 is Course World, which requires an active Nintendo Switch Online membership. There we find both the fantastic and the crappy levels shared by players from around the world. We can dive into both cooperative courses and competitive levels, and thanks to some extensive filter settings, we can search Nintendo's online servers for courses that suit our tastes. Popular and new levels are also displayed there, while the best builders and players are presented to us via the rankings. Another addition is the comments section, which can also be hidden if you don't want people to goof around while you play.

The 100 Mario Challenge from the original has been heavily modified for Super Mario Maker 2. Whoever plays the Endless Mode chooses one of four difficulties and must clear as many levels as possible within a limited number of lives. There are only five lives available on Easy and Normal, while we can restart 15 times in Expert, and 30 times in Super Expert. It is also possible to earn extra lives in the levels so as to not break your chain.

Building our own courses forms the basis for the third pillar of Super Mario Maker 2. Initially, we must choose one of the Mario engines to create our own level with. You can choose from NES games Super Mario Bros. and Super Mario Bros. 3, Super Mario World on the SNES, and the Wii's New Super Mario Bros. U. The new addition is Super Mario 3D World, Mario's great Wii U adventure that introduces a new perspective and several unique components. Unfortunately, it incompatible with the older 2D adventures, because most elements work differently to the latter's 2.5D world.

Certain objects built in this engine behave differently, often constantly alternating between the background (which is pure illustration) and our base architecture (where we play on). Unfortunately, it is not always apparent when these objects have made the transition and thus constitutes an obstacle to overcome. In a way, you simply have to learn which phases you have to avoid, which is why additional clarity would have been helpful.

Choosing the right engine is incredibly important to the flow of a level as it determines Mario's movement, the behaviour of our enemies, and the functionality of certain items. For example, in Super Mario Bros., Mario cannot pick up a turtle shell, because he always kicks it away. The important spin jump came with Super Mario World, while the Wii introduced the helpful wall jump. If we change the engine, a level may not automatically be clearable anymore.

After we've decided on our world's engine, we have to choose the basic Mario world. Those are mere background themes that influence the music and design of terrain objects. After positioning said terrain, items, enemies, more complex objects, as well as sound effects, your course is nearly done, but we still have to beat it on our own before we can upload it. And by the way, we can combine many items, which lets you create some crazy things. Compared to the original, Super Mario Maker 2 has introduced and revised many more mechanics, which increases the variety of available courses. Most noteworthy are the new auto-scroller options, which will be a real pain for impatient players.

But how does it play? Honestly, the building aspect can be pretty complicated. Discovering and adjusting the right functions requires familiarisation and a fair amount of experimentation. We don't have to shake certain objects any more, but some of the mechanics are still somewhat hidden away. The most commonly used tools can be accessed via shortcuts, which beginners might well trigger by accident. This shouldn't be a big problem, but it doesn't make things easier either. Well, Rome wasn't built in a day, right?

Cooperative building on one console is also allowed for two players, although the second builder is more of a supporting act. For example, you cannot move the camera on your own and you have to rely on the first player to adjust the screen. In addition, the main player can interrupt the action as soon as she or he uses the radial menu. Oh, and since a single Joy-Con has fewer buttons to offer, there is a separate control scheme with new shortcuts to learn. That's all a bit awkward, but it's the price we have to pay. That, and it's still fun to help each other out.

In our experience, it's best to play some courses first and start with simple levels to get the hang of things. We were often building in handheld mode because you can select certain objects fairly quickly and consistently. Painting terrain with your finger is also a nice feature, so you don't need a stylus (although having one is helpful). And if you played Super Mario Maker for 3DS, then the Switch's bigger screen will feel like heaven.

Due to the numerous new mechanics and the extensively developed tutorial area (which includes the story mode), Super Mario Maker 2 is an even bigger game than its predecessor. Although the new 2.5D engine has not been optimised to perfection (because it is very demanding for the Switch, particularly in handheld mode), the performance usually stays strong. There will always be things that won't satisfy everyone, but this is absolutely acceptable in the face of the game's overwhelming amount of content and the sheer limitless possibilities it offers.

In its current state, the game is already a driving force, which can feel a bit exhausting at first because of the gigantic pool of creativity. Not only will Mario fans get their money's worth with Super Mario Maker 2 - anyone who feels somewhat attached to classic 2D platforming will too. And the best is yet to come because soon players will be able to discover all of these possibilities for themselves and surprise us with their own ideas (although to get involved with that portion of the game it's worth remembering that you need an online connection and Nintendo's premium membership).

HQ
Gamereactor UK
+
Great tools, addition of multiplayer, loads of pre-made content, huge replayability.
-
Some performance dips.
is our network score. What's yours? The network score is the average of every country's score

Despite the limitations of 2D platformers, creative fans seem to have many ideas for exciting courses. 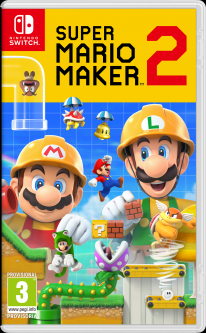