It turns out that earlier rumours and leaks were legit and Super Mario 3D World is finally back in a "Deluxe" format on the Nintendo Switch. The announcement itself was a surprise though, just like the whole Super Mario Bros. 35th Anniversary show Nintendo just published all of a sudden.

The video above shows the amazing 1-4 player platformer which we expect to be upscaled to 1080p60 resolution (on TV mode), and reveals a mysterious additional, bleak world caused by the so-called Bowser's Fury, though this new area is only teased and hasn't been detailed yet.

What the trailer doesn't announce, but Nintendo did, is that SM3DW will get online multiplayer on the Switch, which is indeed a major bonus for fans and an easier way to arrange four-player sessions.

The video finishes by announcing that Super Mario 3D World + Bowser's Fury will release on February 12, 2021, together with new Cat Mario and Cat Peach amiibo figurines.

Sales for Super Mario's latest adventure fell this week by 61%.

It sold 180% more physical copies than its launch on the WiiU.

ARTICLE. Written by David Caballero on the 12th of February 2021 at 16

The title launches on Febraury 12, but for the mean time, check out this collection of images.

Bowser Jr. has to work with Mario in order to calm down his own father. 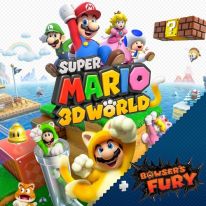