Just in case you've been living under a rock, Bomberman has been around for almost 35 years. It's a maze-based action-puzzle game that has stood the test of time thanks to its distinctive and addictive signature gameplay that has you scurrying around on grid-based arenas, dropping bombs that can both reveal upgrades hidden in blocks and blow your opponents to oblivion.

Super Bomberman R Online, the new multiplayer-only Stadia-exclusive, appealed to me not only because I'm intrigued by the dynamics of the battle royale concept and its many executions, but also because I wanted to see how much the series has evolved over the years (in particular, SBRO looks a lot like 2017's Super Bomberman R). Interestingly, while there are a couple of areas where the game feels substantially different, not least the new player count of 64, the majority of Super Bomberman R Online also manages to feel like slipping on a well-worn jumper and, if you've played a game in the series before, it won't take you long to work out how everything works (although to be fair, Konami could have made things easier and there is a lot that isn't explained well).

Like Sekiro before it, SBRO gives the player the chance to die twice before being kicked from the game, and that reprieve is a godsend as it can take a little while to get into a new game. That's an understandable side effect of releasing exclusively on a growing yet still relatively-new platform, but in a multiplayer game where you'll die often and want to return to the action promptly, it's a more prominent issue than it would be on another console. It's not terminal by any stretch of the imagination and we were never left waiting indefinitely, but the game's online-only focus binds its fate to that of its host platform, Google Stadia.

Each time you join a new game you can choose a new character and each one has its own stats that govern how you can upgrade them over the course of a match. The similar profile shared by most of the characters can make it hard to keep track of where you are, in particular when you're still learning the ropes and switching between characters regularly to find a play-style that suits. Not only can you choose different characters, but you can also tweak their appearance thanks to a plethora of cosmetic items, which are unlocked as you progress through the battle pass (there's an empty shop in there too; microtransactions ahoy!). These new items at least help to boost visibility, making it more than a simple exercise in swapping hats.

Increasing screen readability is also a good reason to pick one of the avatars themed around some truly classic Konami IPs, with characters such as Snake, Pyramid Head, and Simon Belmont. It's here that things get really interesting as some of the different characters bring game-changing special abilities that further mix up the gameplay. It's hard to say if any are seriously over-powered at this stage, but I certainly enjoyed playing around with Snake's invisibility ability, even if it also got me trouble once or twice. With whip attacks, dash moves, and more, there's plenty to get to grips with.

While there are some new features, this is still a faithful Bomberman experience at its core and, a few key differences aside, you'll feel right at home in no time at all. Beyond the new characters, the biggest adaptation you'll have to make relates to the game map. The traditional square arenas are present and accounted for, but they're joined together in a grid, linked by a series of exits. Two-minute rounds are split up by a temporary ceasefire when players can move between areas and look for new opponents to battle. During the course of a match, certain areas will go offline and subsequently funnel players towards each other, until there is but one left.

Of course, once you're in a new area, it's a case of dropping bombs, upgrading your abilities (the number of bombs you can drop, their area of effect, the speed you move, and so on), and staying alive. For me at least, that was easier said than done as I found it hard to keep track of everything that was going on, in particular at the beginning when I was regularly changing characters and working out how they all played. However, it was constantly intense and competing with other players required focus and a little luck, with multiple players swarming the map in an increasingly erratic fashion as the game advances and sections are shut down.

There are more ways to play the game, including a private matchmaking mode that lets smaller, friendly groups come together for more traditional Bomberman action and a Grand Prix mode lets two small teams battle it out. However, the setup here means that you'll need to have a bunch of Stadia-owning friends to make the most of the features. For the most part, you'll be diving into the main battle royale mode, and facing off against fellow players and, by the looks of it, one or two bots to make up the numbers.

Super Bomberman R Online is fun little multiplayer game and it's just the kind of thing the Stadia needs if people are going to stick around for the long haul. Like Tetris 99 and Fall Guys: Ultimate Knockout before it, SBRO proves just how adaptable the battle royale concept is, to the extent that it can be utilised in a game as iconic as this and it still feels true to the spirit of the series, while at the same time delivering intense BR-inspired gameplay that'll see you busting a gut to be the last (Bomber)man standing.

Gamereactor UK
+
Nice blend of Bomberman staples and battle royale mechanics, Konami characters with special abilities, lots of subtlety hidden amongst all the explosions.
-
Sometimes long waiting times, more modes in the main playlist would be nice, confusing at first and poorly explained.
is our network score. What's yours? The network score is the average of every country's score

The 64-player title was previously exclusive to Google Stadia.

The 64-player game is currently exclusive to Google Stadia. 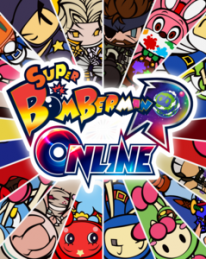