We sat down for a chat with one of the most interesting video game creators out Japan, Suda51, during Tokyo Game Show, mainly to discuss his upcoming third game in the No More Heroes franchise, Travis Strikes Again: No More Heroes. We also asked him if there are any other franchises he'd like to revisit, such as Lollipop Chainsaw, Killer is Dead, Killer 7,

"It would be relatively difficult for a lot of the titles," says Gochi "Suda51" Suda when asked about revisiting other franchises. "Mainly because as Grasshopper we simply don't own the rights to some of these IPs, so it's not really our decision to say we're going to bring this title back. But there are definitely some that if possible I'd like to go back to. For example, Killer is Dead. It's one that I've been thinking for a while that if possible I'd like to make a sequel for it. Although, again nothing at all concrete yet, it's something I've been thinking about. And hopefully, I'll be able to talk more about that in the future."

But first he'll need to finish up work on Travis Strikes Again: No More Heroes that is due out next year on Nintendo Switch.

Suda51 is interested in making a Killer is Dead sequel

"It's one that I've been thinking for a while that if possible I'd like to make a sequel for it."

We caught up with the Japanese game director at Gamescom.

The J-Rock of Killer is Dead

Jesse and The Bonez perform "Bossman".

Fan and Limited editions outlined, a release date, a trailer, plus a lot of new screens.

Check out a killer in action on the E3 showfloor. 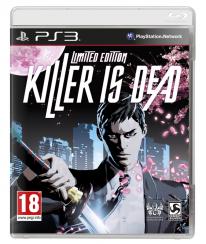