Making a sequel in a classic franchise with a great history and loyal followers is indeed a challenging task. Try to bring it up-to-date and change things too much and you'll be left behind by the faithful, maybe even condemned. Be too loyal to its predecessor, then you probably won't attract new players, you'll get labelled obsolete, and there's a risk you'll get condemned, too. That tightrope is the challenge faced by the developers of Streets of Rage 4: Dotemu, Guard Crush Games, and Lizardcube.

Streets of Rage, or Bare Knuckle in Japan, is a beat 'em up that relies on precision. This is because your characters can't easily run (except in SOR 3) or simply roll away to dodge attacks (bar Skate in SOR 2), so you have to take into account your opponent's movements and their attack, which in turn makes the games more challenging than others in the genre, although finishing them isn't an impossible task. However, completing and mastering these games becomes a satisfaction in and of itself, especially when coupled with a varied throwing system and friendly damage that sometimes causes its own silliness.

With all that in mind, we started playing Streets of Rage 4 and, controller in hand, we launched into several combos and straight away returned to a familiar place. Streets of Rage 4 won't feel alien to veteran players. It still demands precision of movement and the characters can't run with the exception of Cherry Hunter (Adam's daughter and Skate's niece); there are several stages with environmental hazards that can be both annoying and fun; there are variations of enemies that are increasingly challenging and require different tactics to deal with; there are super-challenging boss battles; there's a pleasant abyssal elevator level; the soundtrack still hits the spot and once again presents the work of Yuzo Koshiro and Motohiro Kawashima.

Of course, there are some new things here, too. Now you can hit your opponents in mid-air and wall-bounce them to build a higher combo. This is very satisfying to do, especially if you play with friends and successfully gang up on enemies and keep them up in the air. On the other hand, if you're being bullied there is a special defensive move where you get temporary immunity while dealing damage to enemies, although it comes at a price as you must be willing to lose a few health points, which can then be re-filled by beating your opponents without interruption. We initially underused this feature and were overwhelmed, however, as we progressed we began to utilise it more and it turned out to be a brilliant addition. Some puzzling battles against more difficult enemies can be solved using this technique.

The Story mode in Streets of Rage 4 can be completed in less than two hours. However, this game really focuses on high replay value, which is good because the story is pretty standard, plain even. Instead, players are invited to show their mastery of the game via achieving higher scores. It'd be a big mistake if you only played it through once because the depth is offered by the gameplay. The more you play, the more you learn about enemy patterns, the more you become aware of their every movement. The more you understand each character's strengths and weaknesses (our favourite is Adam, for the record), every time you repeat the game everything gets more fun. You don't even need to replay the whole thing through as you can select specific stages once you've completed the game.

Our sweetest memories of Streets of Rage were of playing it with friends and family. In Streets of Rage 4, you can play local multiplayer with up to four players, something that allows for maximum madness and chaos. Although playing with four people is fun and invites a lot of laughter, we think the optimal multiplayer experience is actually two players. When playing this way we even had our own home-cooked combo, "the eternal beating", where we'd keep our enemies up in the air for as long as possible.

We also had a chance to play online, which so far has proven pretty fun, although the experience is hampered by a little lag. Unfortunately, even though it might only be us, we couldn't join other games and could only host our own. Luckily somebody answered our call pretty quickly every time.

Besides Story mode, there are several other ways to play Streets of Rage 4. One that could keep people coming back is the Battle mode. Here you play against other players, in teams or individually, with up to four players. Although it's as simple as moving the main gameplay system into a limited arena with players attacking each other, it's a fantastic feature that lets you finally pit your skills against other players, both local and online. We don't want to get ahead of ourselves but if it's popular enough we think it could be developed into something interesting. There are also Arcade and Boss Rush modes available for those who are hungry for more challenge, and together these modes add enough content to drive several playthroughs.

If there was one thing that interested us when we first heard about Streets of Rage 4 it's the audio-visual side of the project. Once again, Yuzo Koshiro and Motohiro Kawashima work their magic on the soundtrack, now accompanied by the brilliant Olivier Deriviere (A Plague Tale: Innocence, Vampyr, Greedfall) as the main composer. Right from the appearance of the first intro, long-time fans will feel right at home. Certain fragments of songs feel like tributes to the soundtracks of old, along with themes that also add something new, and we'd gladly recommend you stream the Streets of Rage 4 soundtrack.

Last but certainly not least, is the visual side of things. Decades after the last game launched, SOR4 remains loyal to the 2D style which is, of course, sharper and more detailed in 2020. No longer pixel-art in terms of style, now we can enjoy hand drawn-style visuals, both across the characters and the environments around them. Everything looks fantastic, coupled with the presence of some old characters and enemies who might have been redesigned but are still identifiable.

Even so, not everything is perfect. The last boss is rather anticlimactic with difficulty that is lower compared to previous bosses. The ability to throw your teammates into enemies has also been omitted, which is one of the coolest moves in previous Streets of Rages and we would have loved to have seen it here. And of course, the story is not very memorable, as we mentioned before.

Streets of Rage 4 doesn't stray too far from its predecessor, but it is precisely that loyalty to its roots that make it worthy of being loved once again. It comes with the right mixture of old ingredients but it's covered in a more modern layer of icing and, of course, there's a cherry on top (pun intended). If you're a beat 'em up fan, we'd heartily recommend that you check this one out, and if you're a longtime Streets of Rage aficionado, stop wasting your time here and get downloading.

Oh yeah, there are secrets and unlockables too!

Gamereactor UK
+
High replay value, exciting and challenging combat, lots of unlockable classic characters, huge potential in Battle Mode.
-
A pretty uninspiring story.
is our network score. What's yours? The network score is the average of every country's score

Finally some good news regarding game releases during these trying times, as the release date for Streets of Rage 4 has been confirmed via the Nintendo Eshop. It turns...

Streets of Rage 4 gets retro-inspired physical edition which will be available for pre-order later this month.

Those looking to play Streets of Rage 4 with friends will be able to hop on 2-player online co-op or play as up to four players locally. 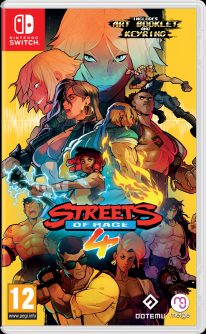