The Duffer Brothers' mega-successful series, Stranger Things, became an overnight sensation after its first season aired back in July of 2016 and since then the series hasn't just been a TV show, it's become a cultural phenomenon. The series has, since its original release, partnered with clothing giant H&M, fast-food chain Burger King, ice cream franchise Baskin Robbins, food manufacturer Eggo, rideshare service Lyft and Coca Cola (to name a few) - but very few partnerships have been initiated across other media formats apart from a mobile game released in 2017 and its partnership with Fortnite. This has changed just recently with the release of Stranger Things 3: The Game (developed by BonusXP, Next Games Oyj and Netflix - Building A for PC, PlayStation 4, Switch and Xbox One).

The game has been promoted as the "official companion game to Season 3 of the hit original series" where fans of the franchise would come to play through various events from the third season and while that's somewhat true, the game suffers from a rushed narrative (which does make some sense considering the amount of content being squeezed into one game). We also recommend it to be played after the player has seen the entirety of the season, not accompanying it as the developer suggests in the game's promotion material, simply because of the fact that the spoilers are many and sometimes take the player by surprise during side-missions.

Stranger Things 3: The Game starts off where the third season begins, with [spoiler alert] the player witnessing some scientists having a secret discussion about an energy ray and its stage of development, before taking control of Mike and Lucas at the Starcourt Mall in Hawkins, Indiana. From the start (probably because of the cooperative aspect of the game) the player can then switch back and forth between the two and from that point on two characters will always be present in the party, even though the characters themselves may change from time to time. The first mission has the player sneak into the movie theatre by taking the entrance at the ice cream parlour where Steve works. So far so good, but since this is a video game, some events are added; instead of just rushing through the back entrance of the ice cream parlour, Mike and Lucas have to smash some boxes to find Steve's keys, fight some rats, bargain with a Russian beefcake, beat up his friends, and power up the elevator to get inside.

The missions don't differ from each other too much, and there are a lot of puzzles that are solved in much the same way, such as pulling levers in the correct order, standing on pressure plates or pushing trash bins onto a third pressure plate while your characters stay on the other two. Typically you'll go from point A to point B, maybe beating someone up on the way, and you experience a simplified version of the series' narrative.

The gameplay is simple, in the sense that you smash things up with your character's unique weapon, power or melee attack, which sometimes grants you items or money (and you smash enemies with that same attack). We found ourselves spamming the A button to swing/kick/slam/spray more than we interacted with almost everything because there's really not much to interact with other than smashing objects and fighting random Russians on the street because they've taken your circuit board or some other item important to them for some reason.

To help in battle, every character has a special ability such as Eleven's energy explosion, Lucas has his bomb (which also helps you bypass the many boulders that are blocking paths around town), or Max's helpful healing ability. Apart from this, you can block by creating a forcefield around your character and equip trinkets to boost your stats in minor ways. These trinkets (among other things) can be crafted by using up all the random gadgets you find throughout the game while smashing everything in sight at a crafting station. Some craftables are new weapons for specific characters, some are defensive additions, some are quest-specific, and some just add some extra power to your party.

As for the narrative and the title's missions, Stranger Things 3: The Game is not for people who haven't yet seen the show because the narrative skips story beats to avoid getting too long, making the player have to fill some gaping plot holes and because of the fact that it doesn't really innovate in any way. Stranger Things 3: The Game is a multi-character game with some Metroidvania elements (it's worth noting that if you need a character who knows how to crawl, hack, cut or demolish something to continue, it switches to the character with that ability if you have them unlocked as you interact with whatever vent, digital lock, padlock or boulder stands in your way, which was a nice touch), simple crafting and lots of straight-forward main and side missions.

The side missions aren't the "secrets of Hawkins" that we'd hoped for as most of them had us helping Karen get some fancy shampoo for her date with Billy, getting Billy some pretzels, or running errands for the lady at the pool. Occasionally the odd interesting side-mission came along, like when we ran errands for a certain old lady who was about to turn into a Demogorgon-controlled undead beast for the second time, but the game relies solely on fetch-quests and a quick tap of the A-button.

It's not really a love letter to the series either, it's really just a simplification of it, so the purpose of it being a 'companion' to the series is lost when pressing 'new game'. Don't get us wrong, we had a good time and we really enjoyed the retro graphics, the references and the music, but it doesn't do the series justice and it also doesn't bring much interesting or even understandable content for those who aren't fans of the series. It tries really hard to be "Fan Service: The Game" and while some aspects deliver on that, a lot of the game does not.

It may sound like we're being overly harsh, but ultimately it left us feeling a little underwhelmed, especially considering the source material it's based on. It is satisfying to relive the moments from the great, '80s nostalgia-driven TV show and the design, the narrative and the music all present a pretty package that is relatively fun to play, especially in local co-op. The thing that bugs us it the oversimplification of it all. Sure, it's supposed to mirror the 16-bit games of old but most of the action consists of pressing a button over and over again, backtracking to open a door or crawling through a vent that you couldn't get through before, and solving the same puzzle over and over again. We still had fun playing, but we expected a lot more from the official Stranger Things 3 companion game.

Advertisements
Gamereactor UK
+
Lovely graphics, great soundtrack, fun to play through the Stranger Things main plot, co-op
-
Repetitive gameplay, tedious puzzles, many fetch-quests, doesn't add to the narrative but just simplifies it, uninspired side missions, weak combat
is our network score. What's yours? The network score is the average of every country's score

Stranger Things 3: The Game is on today's stream

We dive into the video game adaptation of the latest series, taking us back into the scary sci-fi adventure.

Stranger Things 3: The Game launches same day as the series

We got a new trailer that reveals the Switch version as well as some new gameplay, featuring many of the 12 characters available. 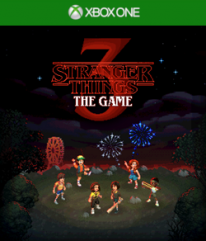