Strange Brigade has just launched (and you can read our review to find out what we liked about it), catapulting you and up to three friends into a rip-roaring 1930s journey into Egypt to face Seteki the Witch Queen and her supernatural monsters, but it's no walk in the park saving the world from evil, which is why we've compiled a list of 10 tips to help you make the most of your adventure.

1) Make sure to explore - This one sounds blindingly obvious, so we'll start with it. In the various chapters you can find gems, collectibles, and most importantly loot, all of which allows you to buy new weapons to pack an even meaner punch. It's imperative to look in every nook and cranny then, so you can ensure you're not missing anything that might be of assistance, and there's also ammunition and health lying around too.

2) Don't be afraid to spend your pennies - Speaking of loot, we know it might be tempting to save up for the most expensive weapon in the loadout (the Audley Burst Rifle costs close to 60,000 gold) but that doesn't mean you shouldn't splash the cash in the chapters, as there are weapon boxes to open, allowing you to get specialised guns that can take down grunts and bosses a whole lot easier. Reach into those deep pockets!

3) Aim for the head! - Anyone who's played a Rebellion shooter will know that headshots are kind of important, and things are no different in the Strange Brigade. There's extra damage to be done along with a satisfying crunching sound, and you can even get an upgrade for your weapons which ups the damage dealt by cranial contact. It's easier said than done, but in the heat of the moment, it might make the difference between life and death.

4) Switch up your loadout - Before each mission starts (extending to the Horde and Score Attack modes) you can change your loadout, choosing your weapon, amulet ability, grenade, and handgun. Each handles differently from the next, so try everything out and unlock different options to find out what combination suits you best, whether that be the slow but accurate rifle or the powerful shotgun with a stick of dynamite.

5) You don't always have to be a good teammate... - Okay, we know what you're thinking, but this is a truly a game about coopetition, meaning that, while you're still allies, you still want to get the most treasure for yourself at the end of the day. It might be worth tripping your buddies up to make sure you're in the money, or perhaps it's worth departing from the pack to snuffle out some gold elsewhere. Don't tell them we told you though.

6) ... but you sometimes need to work together - That said, don't think that it's every person for themselves entirely. There are plenty of big scary enemies that Seteki will throw at you, so it's best to work together when the going gets tough, especially since one person can easily be surrounded if they're left on their own. Four people, on the other hand, can surround enemies and turn the tide of war, which helps against shielded enemies specifically.

7) Listen for the meow - You might hear a cat on your adventures when passing through certain points in the campaign, and what that means is that there's a blue cat statue nearby that you can shoot (six of them will be in each chapter). If you collect them all you can unlock a door at the end of the level to reveal plenty of loot and a golden cat, so this isn't just for the feline fans but also completionists and capitalists.

8) Amulet abilities are your friend - As you make your way through Egypt and defeat the undead you'll gather blue energy, and this all helps to charge a supernatural amulet in your possession. Once this is fully charged, one tap of the button will unleash a powerful ability, from making enemies explode to charging at them with brute force. You can unlock more with skill points, so make sure to find which one fits your preference too.

9) Watch the hands - You might notice when you're making your way through the busier parts of the game that spectral hands will start reaching for you off-screen from where you're not looking, and these indicate enemies nearby about to harass you. Always keep your eyes on the sides and the bottom of the screen for these, as this could prevent you from becoming zombie lunch and getting swarmed.

10) Keep moving at all times - Perhaps the most important tip is to never stop moving, as you'll often be confined to set pieces in Strange Brigade, with plenty of enemies filing in at once, so make sure you're not taking too much time standing still. It can be tempting to line up the perfect aim, but trust us when we say that quick movements with less accurate shots and a sprinkling of explosions is a far better decision. 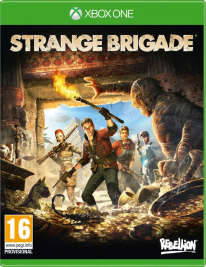