It was revealed during yesterday's Nintendo Direct Mini: Partner Showcase that Story of Seasons: Pioneers of Olive Town would be launching on the Nintendo Switch in 2021. The all-new farming sim will first debut in Japan on February 25, before making its way over to Europe and North America on March 23.

This new entry in the series will see you venture to a new setting known as Olive Town, which is home to your grandfather's old farm. It appears to have two protagonists (one male and one female), and of course, the goal here is to restore the farm to its former glory. It's said to possess over 200 unique events and sees the return of Normal and Seedling Mode.

You can watch the newly-released trailer below. Is this one you'll be adding to your wish list?

Put on your work boots with the plans of restoring your grandfather's farm to its former glory.

A physical Deluxe Edition of Story of Seasons: Pioneers of Olive Town has been revealed

Those who pre-order can get their hands on an adorable buffalo plush.

Story of Seasons: Pioneers of Olive Town will launch on Switch, March 23, 2021

It's the second entry for the series on Nintendo's hybrid system. 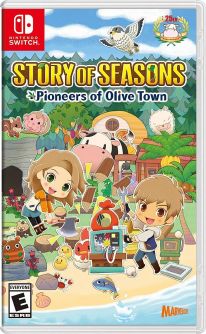