Stick It To The Man! developers Zoink Games have reached an agreement with Swedish company Bergsala (best known for being the longest running Nintendo distibutor in Europe, having started selling Game & Watch in the early 80's and still to this day distributing Nintendo products in the Nordics) wherein Bergsala buys half the company. Zoink will join Image & Form (Anthill, Steamworld Dig) who have a similar relationship with Bergsala and will operate in close collaboration with Zoink. The idea being that Zoink can now self-publish future projects and thus retain rights.

Zoink Games have worked on several mobile titles in addition to Stick It To The Man! and we're still awaiting word on what their next game will be. All three parties (Bergsala, Zoink, Image & Form) reside in Gothenburg, Sweden's second largest city.

Stick It To The Man!

Read minds with a giant pink arm sticking out of your head and take down the man in order to save the day in this adventure/platformer.

Stick It To The Man devs bought by Bergsala

Stick It To The Man! heading to Wii U

Puzzle platformer heading to another platform.

Stick it to the Man heading to PS4

GRTV: Stick it to the Man!

Stick It To The Man! coming to PS3, Vita 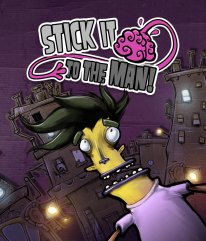