SteamWorld Quest: Hand of Gilgamech may have released earlier this year, but Image & Form has continued to work on the game, and today we're receiving a free update with brand new content and a 20% discount on PC and Nintendo Switch.

This update brings us to SteamWorld Quest 2.0, where completing the story unlocks New Game Plus, letting you replay the narrative and keep most of the non-story progress like cards, items, and more. When you unlock characters you'll also get access to all their cards from the previous playthrough as well.

For those seeking an extra challenge we have the Legend Remix difficulty too, throwing in gameplay twists after you've beaten the game, available only in New Game Plus.

On top of that there's a new art gallery with unseen concept art and illustrations, as well as a jukebox if you want to enjoy the soundtrack. This is even available on Apple Music, Spotify, Steam, and more, if you want to listen elsewhere.

Smaller changes include the Switch version getting HD rumble, the merchant's wagon now containing more consumables, it's now easier to get into the Midas Grand Prix colosseum tournament, balancing tweaks to cards and items, and bug fixes.

You can find out more on the update below. Have you tried this game out yet?

"We were hooked by the combat, the narrative, and the fantastic overall design."

A 20% discount is also applied to PC and Switch, with the update adding several new features to Image & Form's game.

SteamWorld Quest landing on Steam on May 31

After arriving on the Nintendo Switch last month, Image & Form's RPG is expanding its horizons, with a new trailer showcasing what we can expect.

We managed to catch up with Brjann Sigurgeirsson of Image & Form to talk about the upcoming installment in the SteamWorld series.

It'll be exclusive to the eShop "for the foreseeable future" and provides an RPG full of unique cards to build a deck with.

The adorable Steambots enter a brand new era and genre, as we paid Image & Form a visit to test their next entry in the SteamWorld franchise. 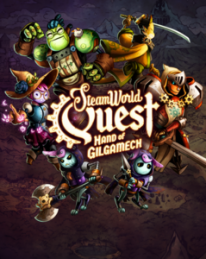