Stardew Valley players got a big update last week with 1.4, suitably called the 'Everything Update', including a ton of new content across the board (which you can check out here), and now developer ConcernedApe has revealed a whole bunch of fixes.

With such a big update there were bound to be some issues, and this new patch for PC platforms addresses some of the bugs found since 1.4 launched. Beware though, as the patch notes in the link above contain minor spoilers.

Alongside the copious bug fixes there are new features too, like a Gamepad Mode selection in the options menu, with default (Auto) switching between keyboard and mouse controls depending on what was last used. 'Force On', however, forces it to use gamepad logic, while 'Force Off' disables the gamepad.

On top of that, you can now purchase museum rarecrows from the night market after you've unlocked them; some non-spouse NPCs now have custom movie ticket acceptance dialogue; and explosive ammo now costs 300g each. Oh, and Vincent now loves snails, apparently.

There might not be any more Stardew Valley updates

The creator Eric "ConcernedApe" Barone is focused on his next game.

It's coming this fall.

It should have fixed a few bugs and crashes, among a few other things.

A board game adaptation of Stardew Valley is now available

Sadly, shipping is only presently available in the US.

Looks like we won't have to wait too long.

The 1.5 Update will come to consoles next year, and the one for mobile should follow later as well. 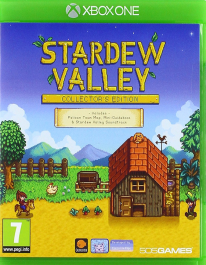