While Star Wars: The Force Unleashed was a pretty flawed game, I enjoyed it - mostly because of the story about Starkiller, Darth Vader's secret apprentice. While the whole "most powerful Force-user in the galaxy" might not have been popular with every Star Wars-fan, I found Starkiller oddly likable and added a bit of good Star Wars-drama which many games in the franchise have lacked for a long time.

With Force Unleashed II, Lucasarts are bringing back Starkiller. Without spoiling too much of how the first game ended, let's just say that the young Jedi leads a rather conflicted life these days. He's told a truth on one hand, while being told that what he believe to be true is actually a lie. And of course Darth Vader is there to make life even worse for him, sending waves of troops and bounty hunters after him. So far, so good, so Star Wars.

Sadly, the story isn't allowed to take up much space. It begins cool enough, but towards the end it's hard to shake the feeling that it's been a lot ado about nothing. While the first game made use of many different locales and plot twists, allowing Starkiller and the people to actually get some room and develop as characters (except the rather bland love story), Force Unleashed II doesn't spend much time worrying about stuff like that. It might set up nicely for a sequel, but it doesn't help the fact that it all comes across as a rather bland middle-part of a trilogy. If you had any hopes that Force Unleashed II would be able to fill a couple of gaps, and actually answer questions you might have, you'll be sorely disappointed. Frankly, it's a squandered opportunity.

The story isn't the only thing that has been rushed to market in Force Unleashed II. The levels lack the attention to detail that the first one had (the absolute favorite being the junk planet Raxus Prime) and they all play like long corridors. The Force Unleashed was very linear, no doubt about it, but the sequel feels even more so somehow. The levels are generally much bigger as well, which means that there aren't really that many of them. A huge chunk of the game is spent on a Nebulon-B frigate, and it's not the most inspiring of environments. Neither is Kamino, the cloner planet from The Attack of the Clones.

The overall gameplay of Force Unleashed II is the same as in the original, with some tweaks and fixes - especially to the camera and the controls. If Starkiller felt awkward to control in the first game, he's much easier to keep track of this time around. That's not to say the game is perfect in any way, but the frustrating moments that I kept finding myself in during Star Wars: The Force Unleashed are more or less completely absent here. It's functional, and Starkiller's new tricks - like the Mind Trick that can turn your enemies on each other, or simply make them jump from high ledges to their death - are fun to play around with. It's still a matter of not playing very defensively, instead constantly pressing the attack.

It does get repetitive quite fast, though. Not only does the cramped level design get in the way of more creative ways to use the Force, but the enemies you fight early in the game will more or less be the same enemies you will fight towards the end. The battle droids might go from trying to freeze you in carbonite to trying to set you on fire, but the way you fight them are more or less exactly the same. Force Unleashed II is also missing proper boss fights (except a final one and one that is mostly a confusing mess). They might have been frustrating at times during the first game, but at least they added some spice to the experience.

Force Unleashed II suffers from a range of technical issues as well, mostly related to graphics. The first hour or so goes by smoothly, but at some point there must have been no time left for optimization and the framerate drops happen more and more frequently - even in narrow corridors without enemies. The further in you get, the worse it gets, and the final fight feels terribly unpolished. It should have been the highlight of the whole game, but it's a boring fight that goes on for way too long.

I hate to say this, but Star Wars: The Force Unleashed II deserved better. At some point during development someone forgot what actually made the first game enjoyable (I'm not sure I'm going to go as far as calling it good). The details are missing, the level design is uninspired, the story is not given the place it deserves. As it stands right now, I would be more inclined to recommend you to pick up the first game than this one if you haven't already played it.

There were times during Force Unleashed II that I really had fun. After all, going nuts with the Force can be hilarious. Some moments are as epic (and more well-directed, even if it's mostly a QTE-fest) as the crashing of the Star Destroyer in the first game. But it doesn't live up to the true potential of a series that could have been much, much better than this.

Advertisements
Gamereactor UK
+
Kicking ass with the Force is fun, great graphics, Starkiller himself still rocks
-
Repetitive, major technical issues, boring level design, same enemies over and over, story is much ado about nothing
is our network score. What's yours? The network score is the average of every country's score 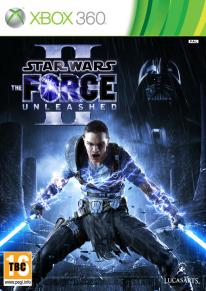