Set around the conclusion of the Galactic Civil War, Star Wars: Squadrons takes you to A Galaxy Far, Far Away and sits you in an iconic starfighter drawn from the most storied of science fiction franchises. EA Motive has been given the keys to the cockpit as publisher EA's continuing alliance with Disney and Lucasfilm has spawned yet another digital adventure among the stars. This time, however, it's a space shooter, filled with X-Wings and Tie Fighters, with five on five combat and a two-pronged story that extends across both sides of the Imperial divide. I had a look at Squadrons this week during a hands-on event, and now it's time to answer the question that I know you're all asking: is this the droid that you're looking for?

If like me, you enjoyed the old Star Wars space shooters of the '90s, the more recent space-based modes in Battlefront II, or even the delights of other prominent franchises where ship-to-ship combat is at the heart of things (yup, I'm looking at you Elite), then: yes, Squadrons is very much the droid that you're looking for. Actually, in this case, you already have a droid sitting behind you throughout, there to keep you company as you battle against AI-controlled bots in single-player or against teams of up to five in multiplayer.

I'm not going to lie, though, and tell you about the bond I formed with my own R2 unit because I simply didn't get that far into things. Star Wars: Squadrons is a tough nut to crack; a layered experience with nuance and depth that doesn't surrender its secrets on the first date. The result is a steep learning curve and a high skill ceiling, and during the three-and-a-bit hours I spent with the game, the best I could do was learn the basics, get the hang of some of the more intricate controls, and then start to explore the subtleties of space combat in an X-Wing.

The main thing, and perhaps the thing I liked most about Squadrons, was the ship interiors. The Force is obviously strong with EA Motive's UI designers and this lends the game an authenticity that I think is going to be key to its success. Space combat is a relatively niche genre within the wider shooter fraternity, but the Star Wars license, and the careful expression of the franchise's distinctive audio-visual language, gives Squadrons the chance to shake off the shackles of specificity and reach a wider audience of players who might well be prepared to dip a toe when they normally wouldn't.

So let's start from the beginning and find out exactly where Squadrons sits in the grand scheme of things. With eight classes of ship to choose from (four on each side, you'll find more on them here), this sits much more on the arcade end of the spectrum when compared to something like Elite: Dangerous, a game with which Squadrons shares a few common features. On the other hand, it's got a bit more going on under the hood than Criterion's enjoyable space combat in Battlefront II, which looked and felt great but didn't offer much in the way of nuance.

The core of the experience is the controls, which will let you roll around, pitch up and down, go fast, hit the breaks, and generally navigate star-filled skies as you look for potential targets. The next layer on top of that involves monitoring your internal scanners and keeping track of your various targets; having good positional awareness is half the battle, after all. Once you've got the hang of all that, it's a case of mastering your internal systems, a balancing act between your weapons, engines, and shields. Expanding on that system, you can also go all-in on one particular area, boosting your abilities and further specialising your craft (more on that here). Thus, it's in the margins of the gameplay where ace pilots will reveal themselves, edging out their opponents with a deliberate shield boost here or an overcharged laser blast there.

I don't mind admitting that I didn't get anywhere near that level during my first hands-on. It was hard enough getting the hang of the controls (I tried playing with a mouse + keyboard at first, but eventually I switched to an Xbox controller because I felt like I had better control over my ship in tight spaces), working out where I was supposed to go, and then landing a few shots whenever combat ensued. Eventually, however, as the hands-on session progressed, things started to feel more natural and I was able to make more deliberate moves - they didn't always work out but that's on the pilot, not the hardware.

Like everybody else, I started off in the single-player prologue. It was the perfect place to get in the zone and learn the most basic controls. It's a forgiving introduction to everything you need to know, and you start as an Imperial pilot on the hunt for rebellious refugees escaping Alderaan. The action started with a pitched battle between your squad and some rebels, before the perspective flips and we're introduced to our Rebellion squadmates, arriving at the battle and experiencing it from the other side. If this is how the campaign proceeds, with contrasting missions from both perspectives bringing two squadrons together for a story that nicely dovetails and fits into canonical events, I'll be pleased. Of course, there are longstanding narrative limitations in the space shooter genre, and you can only do so much from a cockpit with voices feeding you narrative through a headset, but at least the Star Wars wrapper and our shared understanding of the universe gives EA Motive a fighting chance of delivering something memorable.

Once I had cleared the prologue, it was time to try the more casual of the two multiplayer modes: Dogfight. This is a straight-up five-on-five deathmatch mode and I enjoyed it, although we were playing with unbalanced teams and that made it hard to judge properly. In those moments where I was dualling with other journos on an even keel, I had a lot of fun. Once my squad became outnumbered, however, it was too easy for the stronger team to roll over us. While our combat encounter took place around a giant space station, an outnumbered team can't easily hunker down in these types of games and that could prove a problem if matches aren't balanced carefully. AI bots to replace missing players might help, and that wouldn't feel out of place given the solo campaign and the way AI pilots work to support the player during missions.

There are also lots of AI-controlled pilots in Squadrons' signature mode, Fleet Battle. This is a multi-layered mode where players have to fight across an extended battlefield, taking out support vessels before moving on to the enemy flagship. We played a couple of games, winning one and losing the other, but there was a nice ebb and flow thanks to the overall structure of mode. If you get ahead of yourself and push too far ahead of your own line, you're quickly isolated and extremely vulnerable. What's more, the shifting objectives keep you on your toes, with your lightweight fighters going up against similarly potent human opponents at different parts of the map, with both sides playing alongside AI-controlled ships of all sizes there to spice things up and keep the action dynamic. If anything, Fleet Battle got me excited about the potential for even more multi-stage online modes, because the setup here worked just fine and each battle had its own self-contained mini-narrative that could easily extend across multiple scenarios, such as escorting convoys or taking down static bases.

However, all the modes and maps in the world won't make a tiny bit of difference if the ship-to-ship combat isn't up to scratch, and everything I've seen (which doesn't include VR implementation and how that has been handled) points to EA Motive nailing the fundamentals. There's depth to the gameplay that should elevate the experience above rank and file space blasters, and the theme does wonders for its overall approachability. We all know what a Tie-Fighter or an A-Wing looks and sounds like, and we're all well-versed in the shorthand of Star Wars after years and years of watching laser-filled dogfights.

For me, the only major question marks relate to the breadth of the experience and how things will play out over the course of the game's life, and whether or not the studio can craft a story-based solo campaign worthy of the iconic source material that has clearly inspired this project. Success in this area will likely determine Star Wars: Squadrons' wider appeal, but so far everything points to an experience that will, at the very least, speak to anyone who has ever wanted to jump in an X-Wing and take the fight to the Empire (or, you know, sign up for duty and stamp out those Rebel scum - if that's how you roll, I'm not judging).

Thank you for your time. We will take care of this matter as soon as posible 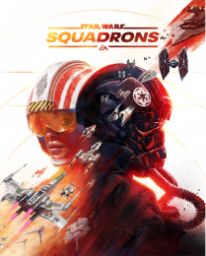