"We didn't want to just make a game for the film. We wanted to take our time."

So says Star Trek producer Brian Miller, obviously conscious of the stigma that the movie tie-in - any movie tie-in - brings with it. Their game, and by "their" we mean both Digital Extremes and Paramount Pictures, who are collaborating on the project, has been three years in development now. Next month they'll know whether it was time well spent when the game's released.

The team approached the project questioning what would reflect the spirit of the series, viewed through the lens of the 2009 reboot and its upcoming sequel. Miller suggests there was two different themes, perspectives. These seen through the two core characters of the franchise since day one: Kirk and Spock. One's the adventurous spirit. The other, more logical. Translate that into game speak, and you're looking at two styles of play - the classic shooter and the steadier puzzle element. Thus they had a blueprint for a game.

The result is a title that's set between the first and second movies and, central characters and starship aside, tells its own story. The team have lifted a threat that ties into the franchise's origins in the form of the lizard-like Gorn. They were last seen in the original series, though they've had an upgrade and diverisifed beyond the original form: there's now ten different types to tackle during the course of this new adventure.

That adventure takes the form of a co-op experience as you control either Kirk or Spock, with AI or friend taking control of the other. While there's an element of different roles during some setpieces, who tackles what is down to player choice, and both Starfleet officers can wield weaponry and clamber over destroyed decks to progress.

The game's trying to reproduce the universe as authentically as possible, with close renderings of locations along with audio and score - music's by movie composer Michael Giacchino - and the movie team were consulted too to keep things accurate. Actors reprised their roles for voiceovers. The list of connections are rattled off. As you'd imagine, expectation for the end result is high.

Visually it's close to the movie, though the simple clean designs of the film have the side-effect of looking overly simplistic on the game screen. The dialogue between the two characters strongly echoes their on-screen personalities. The transfer between cover-based shooting, platforming and puzzles is smoothly done, but each element is rather unsatisifying, and the gameplay seems tailored for casual players.

The combat lacks challenge as the Gorn seem evolved from sitting ducks and offer little threat. The platforming sections currently feel somewhat unpolished, with leaps to ledges proving fiddly, and routes through burning sections of the station aren't as well signposted as they could be. There's a bit more fun with puzzles - one asking us to match multiple frequencies in a strict time limit proves enjoyable - but interaction with the world via your Tricorder is restricted to flagging already easily-spotted interactive objects.

The smarts of our partner AI was questionable, as an otherwise thrilling charge along the station's hull, dodging behind cover as solar flares scorched the hull saw AI Kirk turn into a Starfleet BBQ, and Spock's constant suggestion to stick to cover grew tiresome. At least you're not punished for the computer's mistakes (Kirk remains unhurt despite the scorching) and playing with a friend will likely make these issues disappear.

From the multiple clips of later areas we see during the game's presentation in London, it keeps strictly to the rulebook of the corridor shooter; we're eager to see whether there's any exploration that, along with the adventuring, the franchise is well known for.

There are good moments in which Star Trek works, but in the two relatively short demo sections there were too many issues; coupled with the relative simplicity of the combat and platforming, it doesn't sync up as an experience built over three years. There may have been a great dream in trying to create a unique experience, but this is looking just like a nice supplement to the theatrical release of the second film. 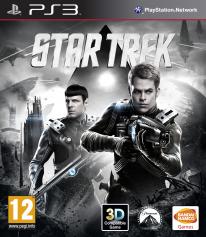