Namco has just released these images from the J.J. Abrams inspired Star Trek. The game is expected out sometime early next year.

Namco also released some details of the adversaries Kirk and Spock will be facing. The Gorn are to make an appearance; knowledge that will likely cheer fans of the long running franchise.

"The Gorn are among the most iconic villians in the Star Trek universe and their role in this game certainly lives up to that persona ," said Brian Miller, Senior Vice President at Paramount Pictures and lead game producer.

"Kirk and Spock find themselves in an incredibly challenging amount of mayhem as they confront the Gorn throughout the game."

Carlson Choi, VP of Marketing at NAMCO BANDAI, said: "Great villains give our favorite characters a chance to become heroes in the process of attempting to eliminate a powerful threat, and Star Trek fans have been eagerly anticipating the moment when the antagonists of the game would be revealed."

"This is one of those moments and we couldn't be more excited to give gamers a glimpse at the challenges that lie ahead for Kirk and Spock." 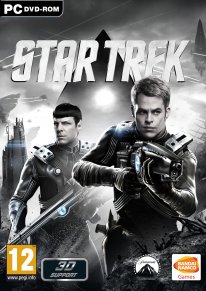