Someone at Square Enix seems to have been a little too eager ahead of Microsoft's E3 press conference and announced on their homepage that Nier: Automata is coming to Xbox One in a brand new edition called Become As Gods.

The listing was removed quickly but the damage was already done and the information saved for posterity by people on the internet. It's going to be released in the US on June 26 (likely the same day or at least same week in Europe) and below is everything included:

Expect more about this during Microsoft's E3 press conference. 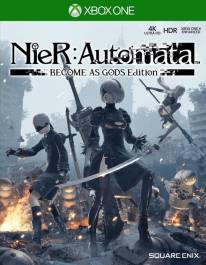