I think I've pointed this out before, but racing games bore the living daylights out of me. Like most sports, the thought of being the fastest for nothing else than, you know, being the fastest doesn't entice me at all. But add some explosions, and you got me hooked. I'm no stranger to racing, as long as there is some form of violence to frame the whole thing. Just like I find football extremely tedious, but think Blood Bowl is one of the greatest things in tabletop gaming ever.

In that way, it came completely natural for me to sit down with Split/Second in the same way as I would with Super Mario Kart (or its grown up sibling, Blur). It's a racing/explosion extravaganza, with a backstory as stupid as the concept itself - Split/Second is the name of a television show, in which racers race around a track while setting off explosions that will hopefully throw the competitors off the track. Or pulverize their cars. Whatever works, really.

Don't get me wrong when I call the concept "stupid" though. The story of The Running Man was quite stupid too, but it still made for an entertaining film (I think, anyone seen it recently care to update me?). And just like in Pure, Black Rock's spiritual predecessor to Split/Second, it makes for an incredibly entertaining game. The speed is relentless and many times I gasp for air - not only when an airplane comes crashing down on the course in front of me, but also when I drift and slide my way across the track to gain the few extra inches I need to get into a better position. A race is not over until you've crossed the finish line, your opponents are there to make sure that the environment blows up in your face every step of the way.

You accumulate power by doing drifts, or drafting behind your opponents' cars, and the more power you get the more insane things you can pull off - including blowing up stuff big enough to change the course of the track itself. You can also use it to opening up new shortcuts, shortcuts that will (hopefully, if everything goes to plan) close right in the face of the car behind you. Combine all of this with the speeds that the game runs forward in, and you better learn how to keep your eyes on the road at all times.

There's a bunch of different gaming modes, ranging from racing to air strike (where you are chased by a helicopter and you need to dodge the missiles it fires at you), and you get credits and unlock new cars and tracks (called episodes) as you play them. It's all made to be extremely fun, which I guess is something seems to summarize what Black Rock try to do with their games - make them fast, over the top and fun. Pure was hilarious, in all its overblown grandeur, and so is Split/Second. I'm laughing and yelling at the screen, even when I'm getting my behind handed to me in multiplayer.

That's not to say Split/Second is a perfect game, though. It has problems, including the frustration - the yelling at the screen is also in real anger at times. Being bumped down from first to last place because of a small mistake is frustrating and while the game isn't as nasty to the guy in the lead as Mario Kart, it is balancing on that very fine line. Multiplayer is also very unfair to the beginner, as it uses the same cars as you've unlocked in singleplayer - don't expect to come even close to the top if you haven't unlocked the higher tiers of cars. No biggie, I still had a lot of fun online while playing with the early cars, but then I'm not the very competitive type.

It's also quite sad that the explosions - the so called "power plays" - are static and the races don't become as dynamic as they would have been able to if the whole thing had been dynamic. Then again, perhaps that's asking a bit much of the current technology. Split/Second does look good, and it runs very smooth despite all the things happening on the screen, so much more than this and I'm not sure the current generation of consoles would have been able to take it. It does add that extra metagame of studying the tracks, though - learning where each power play comes into play and how to time them for maximum amount of damage.

Black Rock know their stuff, they know how to make fun games. They deserve a big salute for that.

Gamereactor UK
+
Good graphics, over the top explosions, fun multiplayer
-
Static destruction, unforgiving
is our network score. What's yours? The network score is the average of every country's score

Black Rock, the creators of the wild Pure, are back with another over the top racing game. Split/Second is a game about speed, but it's mostly about blowing stuff up. Which is fine by us.

Split/Second for PSP gets date

As in release date, not a dinner date

One from Split/Second DLC

It a screenshot of a car. Go figure

It's slightly longer than the title suggests

We talk to Black Rock Studio 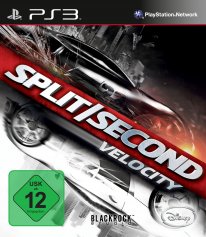