There's two flavours of Spies vs. Mercs. The first is Classic - a relatively untouched version of the popular adversarial mode that originally appeared in Splinter Cell: Pandora Tomorrow. It was a much requested feature from fans after its absence in Conviction, and Ubisoft has duly obliged. The second - Blacklist - is a variant of the original, and although little changes other than the amount of people involved, this increase in numbers changes the feel of the game dramatically.

Both are fun. There's potential in both modes to eat away at evenings and inspire intense rivalry between friends. We only sampled a handful of games of each type, across a trio of maps, but so far this fan-favourite mode is shaping up rather nicely.

Classic first, because it's the one Splinter Cell fans will be most excited about. Apart from the customisation features (we'll get to those later) it's almost the same as the game many have played before. As Blacklist's multiplayer game director, Gunther Galipot, told us: "This one we left it pretty much untouched... Those fans from the first Pandora, I really wanted to make sure that they had their Spies vs. Mercs back."

Players pair up and take each other on in incredibly tense and tactical battles. The mercs are cumbersome but deadly fighters, played in the first-person they're formidable, and more often than not they'll make short work of any spies that cross their path. Spies on the other hand are as elusive as they are fragile, but up close they're deadly, and they're equipped with a variety of tricks to help them get out of trouble. They're played in the third-person, which is important because it allows them to better survey their surroundings: "without this kind of camera you will be almost blind, and you need to anticipate... if the spy's not prepared he's not going to live very long."

The basic premise is simple: spies must hack the three terminals located on each map, the mercs must stop them. Both teams take it in turns to play as both classes, and the winners are those who, as spies, can hack the most terminals in each ten minute round.

Played as a merc, you rely heavily on your flashlight and your guns. Spies cling to darkness, it's their very bestest friend, and only the piercing beam of a torch is enough to displace them from the shadows and flush them out. They're constantly reacting to the actions of the spies; as soon as they strike at one of the three consoles a clear objective and destination is set and off they go. When they arrive at an area being hacked a hunt ensues, and once the spy that activated the hack has been killed, a short timer counts down, and when it's run out the clock resets. Before the timer runs down, if the remaining spy can re-activate the hack, the countdown continues.

Spies must start the hack and then blanket themselves in darkness. Finding a crafty place to hide is essential, left exposed the merc's bullets will quickly end resistance. Deadly melee skills make the spies fearsome in close quarters, but the merc's heavy armour loads the dice firmly in their favour when it comes to a straight-up gunfight.

Once a hack is set motion it initiates a deadly game of cat and mouse, with mercs desperately trying to stop the cycle, and spies slinking into darkness, deploying their tricks as they try to stay alive long enough to score a point. Spies must stay within a certain distance from the hack, meaning there is limited options when it comes to concealing themselves. Sometimes sitting still and waiting it out isn't a possibility.

We were able to sample a couple of maps, and they're carefully and deliberately designed. There's verticality in their layout for the spies to take advantage of, giving them options and places to move, and it means that while the mercs haven't got the same range of movement options, there's always plenty of places to search as beams of light scan the ceiling and pierce dark corners. Mercs now have explosive drones at their disposal, which can fly into the upper areas of the environments, but using a drone leaves a merc vulnerable to attack. Several of our easiest kills came from taking down opponents as they piloted these devices.

Classic mode is tense stuff, but it's nicely complimented by Blacklist. In this alternate game mode four players play on the same team, and safety in numbers allows for the spies to be much bolder in battle. Games are more frantic, and it's easier to score points and capture objectives. On the face of it Blacklist feels more accessible, and perhaps initially it's more fun, but Classic is the main course here, and it doesn't take long for its charms to make a good impression. Before our session was done with the game we had time enough for one more game of our choosing. We played Classic.

Where both modes differ significantly from the original is in the customisation options available to the player. There's scope for a huge range of play styles, and while we only had time enough to sample some of the presets on offer, there's evident depth here. There's plenty of options - ranging from passive abilities to handy gadgetry - and we're looking forward to getting our hands on the finished product so we can really tailor our experience and see just how deep this game goes.

From the handful of matches we were able to play, we quickly warmed to the Intel Scout preset that allowed us to scan the area and mark enemy troops for our allies. There's also a Saboteur (using technology to disrupt enemy equipment for easy takedowns) and a Predator (cloak ability for additional stealth) for spies to get their teeth stuck into. These builds guide players into certain ways of playing the game, and encourage team play. Variety is only going to make your team more competitive, and further down the line, when players are far more adept at the game, it's easy to see that balancing skillsets with others on the same team will be essential when trying to get even the slightest advantage on the battlefield.

There are also three different preset builds for the mercs. Peacemaker is joined by Hunter and Disruptor. The accompanying skills of each class are designed to cancel out those of the spies and encourage balanced play, but every class has a weakness that can be exploited. As Galipot explained after our demonstration, they're working hard to find balance between the two forces: "[spies] can resist poison gas, for example, as you can equip the gas mask, or as a mercenary you can avoid being blinded by having an anti-flash visor... you'll be able to create your own play style... players can push whatever activity in the gameplay that they want to push."

Movement on the battlefield feels substantial and weighty, and coupled with the impressive array of tech and gadgetry, adversarial combat in Blacklist feels unique against the backdrop of the modern marketplace. Fans of the original are being well catered for. Campaign and co-op are ticking along nicely, and you'll be able to read more about those facets of the game on the site in the coming weeks, but it was Spies vs. Mercs that really caught our attention in Toronto, and we're looking forward to getting our hands on the finished product when it's finally released in August.

"This is clearly the best game in the series that we have seen on this console generation."

"The Splinter Cell" by Atomic Productions makes us wonder what the "proper" big budget movie adaptation will be like.

Michael Ironside on Splinter Cell: "I didn't want to do it"

Actor recalls problems with original version of Sam Fisher, worked with creators to give character "some humanity".

A deadly Sam Fisher in action. 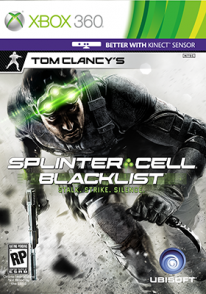