Before we got hands on with Splinter Cell: Blacklist, creative director Maxime Béland opened up proceedings with a little talk. It was a whistle-stop tour of the ideas behind the game, discussing the themes, story, and how it will all be presented. "We're really blurring the lines," he told us when describing how neatly the single-player and co-op campaigns will fit together as part of a cohesive experience.

In the latest edition of Gamereactor Magazine we look at the game as whole, from the motion-capture to the co-op campaign. This hands-on session was all about the single player. There was another chance to play Spies vs. Mercs, but due to technical issues our time there was cut short (you can read our impressions from an earlier session with the returning online mode here). Not that it matters, multiplayer is shaping up nicely, but there was nothing really new there to report.

What was new came in the form of the single-player campaign. We had a chance to play through two and half levels, and in doing so experienced a variety of different scenarios. Like all Splinter Cell games, stealth was at the forefront of our experience, but there was plenty more for us to get our teeth stuck into.

The first level sets the scene perfectly, and tells you in no uncertain terms what kind of game Blacklist is. There's no pre-amble. No menus to shuffle through. Straight away we're into the action. Troops are storming a base, scything down enemies as they meticulously stalk through its dark corridors. A high ranking officer in a control room, resting on his knees as he stares down the barrel of a gun, says something along the lines of "America will find you" before the perpetrators of the terrorist act put a bullet in his head.

Given everything we've seen of the game so far, the accent of the terrorists is a surprising one. I'll not drop a spoiler here, but there's obviously more going on here than one would first suspect from the levels we've already seen in Iraq and Libya. This new enemy is called the Engineers, an organisation bent on having America remove her troops from every country across the planet, with failure to abide by this directive resulting in terrorist attacks designed to impact the very fabric of American society. Every seven days, The US's continued military presence across the globe will result in some form of attack. The attack on the base that we're witnessing is only the opening salvo, a signal of intent, and simultaneously the act of making the Blacklist live.

It also happens, purely by coincidence of course, to be where Sam Fisher and his brother-in-arms Victor Coste are. They don't see the attack go down; they're just setting off on a helicopter ride home, but as they take off a series of timed explosions rips through the base and sends the chopper crashing to the ground a short distance away from the perimeter. It's at this point that we join the action.

Sam and Vic scuttle back into the base, avoiding the eyes of patrolling enemies, and witnessing a few friendly troops going down under terrorist fire. The next sequence, as we seek out and deactivate a radio jammer being used to block communications, acts as tutorial for the uninitiated, and as a chance to warm back into the action for returning players. We perform a stealth takedown on an unsuspecting guard on the periphery of the base, instantly unlocking the refined "mark and kill" mechanic that will likely come to define the revitalised Splinter Cell brand (you can tag enemies in advance and then take them out with a button tap when required). We don't use it yet, preferring to go in using stealth and cunning.

A short walk later and there's enemies aplenty. Old habits die hard, and straight away I find myself restarting the checkpoint as soon as Sam is discovered. I go again, get a little further, and see the whole environment, and now I'm able to plan my next move more effectively as I try to weave through scenery unseen. After a couple more attempts, both ending with Fisher on deck, riddled with bullet holes, I take a different route. This one proved to be much more fruitful. Cover provided me a point to survey the area. On the left two soldiers were firing at American troops in the distance, on the right there was a patrol and several more soldiers milling around looking for something to do. I went left, dispatched the soldiers who's attention was elsewhere, then mopped up the patrols as they neared my bullet-edged spider's web.

I continued through to the level's conclusion, and quickly delved into the next stage, Benghazi. This is content I was already familiar with, so I knew the quickest way to advance through the level. One thing I didn't know from my previous play-through, was the ultimate reason behind the mission. I'll not spoil it for you, other than to say a character from a previous Splinter Cell title makes a return, and is not too pleased to see Sam.

The dusty environments once again impress. It's still an older build, but I can't imagine there's many more improvements to come. The enemies you encounter have a realistic gait, animations are up the scratch, the AI seems solid, and the environments are detailed. There's different routes through the various parts of the level, and where possible I utlilised these alternate paths to see how the experience differed. There's opportunity for plenty of close-quarters combat, and well as the occasional flash of gunplay, and distracting guards and luring them into traps is as satisfying as it ever has been.

After rescuing the VIP at the mission's end we made good our escape via a zip-line. The credits rolled up and I was presented with statistics that explained how I had progressed. Béland, who had been sitting with me during the final part of the mission talked me through how your actions affect your rating. I reached Mastery level in Panther, although subsequent play-throughs will allow players to aim at similar levels of accomplishment playing in Ghost and Assault styles. The game's creative director wants players "to fall into" other areas of content, and play in ways that might not immediately occur to them.

Based on my performance, Maxime Béland would describe me as the quintessential Panther player. With me it's all about aggressive stealth. Others veer towards the other two recognised play styles; Ghost and Assault. Ghost is the purest expression of Splinter Cell, using stealth and cunning to avoid discovery at all cost, whereas Assault players prefer their guns blazing. I sit somewhere between the two, and in this respect I'm not alone.

Béland also explained the economy system. I was busy shooting and sneaking, so I wasn't taking detailed notes, but in essence credit earned during any part of the game, whether that be single-player or co-op (where all but four of the missions can be played solo) can be spent on enhancing your experience anywhere else in the game. We also talked about Shadownet, where daily and weekly challenges will be presented to players, offering them chances of bagging even more credit to spend on upgrading their weapons, gadgets, and the Paladin aircraft that acts as Sam's mobile fortress and is the hub that links all of the various strands of Blacklist together into one accessible area.

I had enough time to get stuck into the start of the next level, this one set in Mirawa, Iraq. It opened with a sniper sequence, with the player controlling Sam's co-op buddy Isaac Briggs, and providing cover for Fisher's insertion. It took a couple of a restarts to get it right, but it was a nice change of pace. I was playing on normal, so it'll be interesting to find out how a change in difficulty will impact the moments like this that sit outside the core gameplay experience.

Once the patrolling guards in the canyon below had been dispatched, Fisher must make his way past another set of troops, this time garrisoned in and around some wooden huts. I opted to stealth past them, but again there's options for the players who may prefer a more direct approach. After sneaking by, I climbed a stone staircase to another building, this time using the Tri-rotor drone to infiltrate the fortified structure and identify the target within. I then scaled the side of the building, and proceeded to track down the laptop that contained the information Sam needed.

Sadly I never managed to retrieve it. A heavy guard stationed in the room with the laptop made sure I had to endure a couple of deaths, and there were a couple of moments before that where enemy eyes fell on Fisher and I was blasted back to the loading screen. What I did take away with me was a firmer idea of what's coming in the final version of the game. Fans of the series can relax; the changes made by Ubisoft Toronto need only be cosmetic, and the increased verticality and alternate routes mean it'll be possible for them to have a genuine Splinter Cell experience when the game launches next month. Those less interested in a purely stealth driven game can also look forward to getting their hands on Blacklist. There's options for different play styles, there's polished gameplay elements, what looks like an intriguing and compelling story, and cohesive overall experience that'll bring together the game's various strands. We're looking forward to finding out if the final build of the game lives up to our growing expectations.

"This is clearly the best game in the series that we have seen on this console generation."

"The Splinter Cell" by Atomic Productions makes us wonder what the "proper" big budget movie adaptation will be like.

Michael Ironside on Splinter Cell: "I didn't want to do it"

Actor recalls problems with original version of Sam Fisher, worked with creators to give character "some humanity".

A deadly Sam Fisher in action. 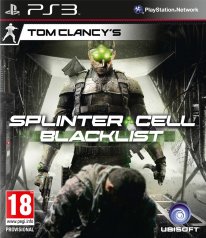