Splatoon's an unconventional third-person shooter. Instead of cartridges and bullets, it's brightly-coloured paint. But you're mistaken if you think of it as paintball. Colour is the defining element of the game. We use it to attack enemies and to paint our territory, but this viscous mucus offers excellent tactical advantages.

Shower an enemy in the stuff and it slows them down. Press left trigger and you transform into an octopus that can swiftly swim through any friendly-coloured goop smearing the floor. But stay still in this form and you can attack any enemy that passes by. Paint a wall, and you're able to climb it. But the tentacled critters can get tired easily, and you'll eventually fall off from exhaustion.

We tinkered with the single-player only briefly during our day-long session with the title, but it revealed some of the game's more interesting techniques, and introduced some puzzle sections as well.

Many levels are clearly designed to teach core game mechanics. As with many multiplayer-heavy experiences, Splatoon's single-player may be more tutorial for the multiplayer than anything, though we're curious to find out whether some solo mechanics apply to online.

But even in its present stage of development it is obvious that the online matches will be the highlight of Splatoon. On average a game takes between three to five minutes. Respawns occur after a short delay and there is even a Killcam come our exit. As Splatoon is focused on team battles, we can beam to a team-mate right after a respawn; by tapping the position of a friend on the Wii U GamePad our character will be catapulted to the selected location.

We already see two types of players emerging. Those who paint the battlefield in their colours and those who like to hunt for their opponents. But the better teams are those that combine both. The matchmaking system supports this by splitting players across teams so there's an even mix of skill levels and types on both sides of the arena.

All weapons have the same range, but there's class-based abilities that make matches unpredictable. Hurting opponents or painting surfaces fills up a power bar. Once full, your ability is available. A push of the right stick unleashes a devastating colour storm, deadly precision strikes or traps. Most classes have a second active skill which doesn't need charging.

The frontline soldier can throw colour grenades to hit enemies, or for splattering large areas of the level, but it consumes a lot of paint, forcing him to hide. Paint refills automatically, but it'll take a while. Diving in your own ink as an octopus will regenerate ammo faster.

Once you're in a match you can't switch weapons. While this may seem counter to our expectations from multiplayer shooters, here it adds a layer of welcome randomness. You don't know what loadout your enemies will be carrying, and you need to adapt on the fly. However, it does demand a well balanced team to counter any threat, and if players aren't cooperating, it's easy for the fun to drain away as you realise it's hopeless to win the match. Would it be solved by weapon switches during matches? Likely. But will the developers decide to tweak the game to include it? We don't know.

Turf War mode is Nintendo's equivalent of the classic Team Deathmatch, with eight players divided into two groups. Kills aren't counted, a win's only measured by who's adorned the bigger area with their colours. Splat Zones is aimed for more experienced players; basically King of the Hill. It is intended as one of several ranked game modes, and you'll need to be at least Level 10 to participate. These ranked modes won't be available at launch though, as the studio is keeping track of the community to see if there's enough participants hitting the Level 10 cap for the competitive modes before activating them.

After successful completion of several online rounds we gain experience points and money to customise our character and to unlock new gear. The strange character design is very appealing and we can see ourselves decking our avatar out in garish attire.

After this brief session we're fairly optimistic. Splatoon is a brightly-coloured spectacle with some very interesting gameplay mechanics. No doubt you have to get used to the complicated controls but the different play styles and game modes are very satisfying. But we've one question: is Splatoon a game for children? At first glance: yes. The bright colours scream Nintendo accessibility. But after several hours play, it's clear the game requires a lot of practice and experience. So who then is its audience, and does it have the staying power of the MP greats? We'll find out soon enough.

"We need more time to access the modes now the game's out in the wild, but our pre-launch play has proved very promising."

Not quite what you expect to see.

Soon you can see more of the inky shooter's art.

Rumour: The Splatoon on Switch is not a sequel

It's just another version of the game.

The Switch may grow Splatoon even more as an esport

Things are growing for Splatoon now, but will they continue to do so?

Nintendo and Battlefy have teamed up to make this tournament happen.

Create your own Splatoon candy

Moulds and powder let's you recreate tasty versions of your favourite Splatoon characters. 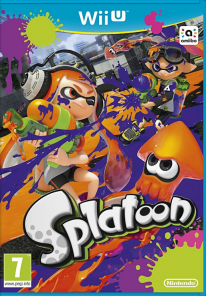