Leading up to the release of Spider-Man: Shattered Dimensions one game has been mentioned over and over and over again - Batman: Arkham Asylum. Call it superhero envy, or just plain old hype, but somehow someone got the idea that if Batman could do it, so could Spider-Man. It didn't quite turn out that way, even if Shattered Dimensions is a step in the right direction for Spidey. It's not a sandbox game filled with repetitive missions like many of its predecessors, but instead it's a traditional third person action adventure. One that stars four incarnations of Spider-Man.

This is where I would normally spend a paragraph telling you about the story, but to be honest I skipped the opening sequence by mistake (maybe it was pure reflex). But I don't think I missed out on much. Spidey needs to collect shards of some tablet in order to restore order in the four universes, and somehow every shard has fallen into the hands off a villain. Tough luck. Each level sees one of four Spider-Men chase after a bad guy, beat him up a little, take out his hench men, maybe save a hostage or two, kick shard enhanced villain in a final showdown and move on. Rinse and repeat. And add to that a rather poorly written dialogue, that will have you cringing on occasion.

It sounds terribly repetitive, and in terms of narrative it is, but fortunately the gameplay is a bit more varied and the four different Spider-Men each have their own unique feel to the gameplay and visual style. The core fighting mechanics remain the same throughout, but the difference between the stealth sections of Spider-Man Noir and the rage mode of Ultimate Spider-Man is vast.

Speaking of noir, I had high hopes for the stealth section, especially as the game was being constantly compared to Batman: Arkham Asylum, but unfortunately the noir levels came across as the least interesting ones. The levels mainly consisted of zipping on beams above your enemies and catching them with a one button takedown from above when it was safe to do so. Boring and repetitive.

Then I enjoyed the Ultimate and 2099 sections of the game far more. Action, action, action. But thanks to a rather nice fighting system that you evolve by spending points you earn by defeating enemies and completing challenges, it's up to you to make it interesting. The enemies you face are rather boring, even if some levels feature unique kinds of enemies, one example is the sand enemies you face in the Sandman level. Before you defeat them you have turn sand into clay by throwing water barrels at them or opening up water valves. It's variation compared to the rest of the game, but spending 40 minutes or so fighting sand enemies still feels a bit repetitive. I had a feeling that the levels stretched on for just a bit too long, and by the end of it I was a bit tired of that Spider-Man and the theme of the level.

Spider-Man: Shattered Dimensions should not be placed next to the likes of Batman: Arkham Asylum, instead if it more similar to the kind of entertainment I got out of X-Men: Wolverine's Revenge. There is ambition. The unlockables, the reward challenges, the good mix between a deeper combat system, and the accessibility of a button masher, the heavy focus on the villains, the visual styles, it's all components that I enjoyed. But the level design, and overall polish leaves a lot to be desired. The camera could also have done with a bit more work. It would have been a source of a lot of frustration had it not been for the forgiving gameplay mechanics, and the fact that you very seldom die.

The boss fights are interesting set pieces that sees you fighting against the villain of the level in some sort of arena. Some of them are a bit confusing at first, as you typically won't be able to do damage to the boss unless he is in a weakened state or if some other prerequisite is there. During the boss fight against Sandman, the female narrator voice wound be sounding like a broken record telling me to hurl water barrels at the Sandman heads inside the tornado. Can't you see that's what I'm doing, lady? And unfortunately that was just one of many technical glitches I ran into during my playthrough. In one of the later levels I got stuck to the floor and had to restart the level. That was the most serious issue I ran into, but there were plenty of smaller ones along the way.

The 14 levels offered up in Spider-Man: Shattered Dimensions will likely take you a good 7-8 hours to complete if you're an avid collector of emblems and hidden spiders. There is a certain level of replay value in going for gold medals on each level, or completing them on the hardest difficulty, and overall I must say there is surprisingly good value here. It's a game that in the hands of a young Spider-Man fanatic is going to last a long time, especially if you are going for a platinum trophy or perfect gamerscore.

Shattered Dimensions is a mixed bag. It's as if the game designers didn't quite have the courage to aim high enough in certain areas and opted for safety first, but it's still a step in the right direction for Spider-Man. It's not the massive leap our eight legged friend could have used, but it's worth taking a closer look at if you're a fan of Marvel's most beloved character. 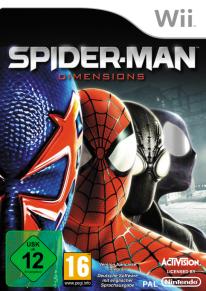