Most of us felt like it was time for a break from Marvel's Cinematic Universe (MCU) after Avengers: Endgame and not just for our sakes, but also for the actors that have put in over a decade of work into the three-generation series. The third phase of the MCU with Thanos and his dear Infinity Stones saw a worthy end and it seemed like the appropriate time for a well-deserved superhero respite. Shortly after, however, Marvel released a trailer for Spider-Man: Far From Home and all of a sudden, everyone forgot how they'd wanted a bit of time off, including us.

While Avengers: Endgame was an ensemble composed of all the franchise's superheroes, this has never been the goal of a well-put-together Spider-Man movie. Spidey's universe, although some cameos occur, is generally limited to his specific lore and adventures. He has always been the friendly neighbourhood Spider-Man, with an emphasis on the neighbourhood. However, as Nick Fury so eloquently puts it in both the trailer for the movie and the actual film: "B**** please, you have been to space". The circumstances have changed tremendously since the departure of Tony Stark, even for the youngest Avenger.

Yet, in a post-Iron Man world, the film manages to stay incredibly self-maintained, just as its predecessor Homecoming did before it. Since it's a movie within the MCU, it is of course also filled to the brim with references (it could even be the movie with the most references across the entire franchise), but it still feels like a film separated from the rest.

Far From Home is, besides being a good standalone film, surprisingly funny, which says a lot considering how high the previous movie set the bar. Get ready for laughter-induced belly-aches because despite being a movie packed with action, it is, above all else, a comedy. The two teachers who are on tour (played by Silicon Valley's Martin Starr and Curb Your Enthusiasm's J.B. Smoove) have some amazing oneliners in store for the audience that makes Peter Parker's life as entertaining as that of Spider-Man's. Peter Parker is equally as interesting as his superhero alter ego. Typically, you want a good mix between the two, and this is well-implemented in Far From Home, among other things due to some sublime directing by Jon Watts (who also directed Homecoming) and Tom Holland's awkward but loveable personality. The separation of the two works perfectly in this movie, which has more focus on Peter Parker than Spider-Man.

Like in homecoming, Far From Home's plot is incredibly streamlined and there are few scenes that don't move the plot forward significantly. Besides being concise, Far From Home doesn't strictly follow the typical Marvel mould either, especially in the villain build-up. Normally, the antagonist is revealed rather quickly and impossible to feel sympathy for as a viewer, but even though Far From Home makes it clear who the antagonist is early on, it manages to break that template of the viewer having no sympathetic feelings towards that character. A big part of this in Far From Home specifically is Jake Gyllenhaal's performance and Marvel's impeccable casting overall. Far From Home also manages to distinguish itself in the final showdown, which doesn't consist of the typical Marvel traits. The villain and the hero also don't have the same powers, which is a cliché the older Marvel movies stood by, such as Iron Man and The Incredible Hulk as well as later titles such as Black Panther and, to some extent, Captain Marvel. In fact, the final battle in Far From Home is one of the most entertaining, purely action-oriented, long-standing battles in MCU history, at least in our opinion.

Although Far From Home is incredibly entertaining, it suffers from the oversaturation we all partially felt after Endgame. It's like eating a delicious dessert after chomping on the main course for three hours. It's nice, but you can't appreciate it quite as much with that big meal already in your system. However, Spider-Man: Far From Home is an excellent movie that would most likely have been better appreciated had it been released at a different time.

The movie ends without having changed the universe too much, at least before the credits roll. Then, in a few minutes, havoc descends on the future of Spider-Man in a scene that brings two things to the table post-film. It brings possibly the best cameo in the history of the franchise, and it makes the wait for a third movie in the series feel unbearable. We do, however, hope that Spider-Man 3 doesn't come too soon.

MOVIE REVIEW. Written by Mathias Uttrup Østergaard on the 12th of July 2019 at 17 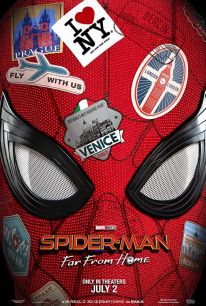