But we hold off: impatience, we remind ourselves, not a virtue here. Neither's greed or curiosity - yet these two offer plenty of reward in the dark caverns of Spelunky.

Spelunky is the new and polished Xbox Live Arcade version of the game of the same name that's been available on PC. It's a 2D platformer, a crazy adventure platformer with randomly generated levels - and new locations for treasures, damsels, items and exits - each time you play. The concept works amazingly well.

Our Harrison Ford-lookalike has to work through five worlds, each with four levels, and in each one a exit. A exit shaft hidden somewhere in the deep dark caverns. You've just to find it.

Like Indy, our hero's got a whip, but he's also packing whatever will get the job done: bombs, ropes, jetpacks, spiked boots, a compass or even a shotgun. All purchasable in the game's store, paid with treasure found during exploration, and carried over from one level to the next.

Somewhere in these cave systems also lie damsels in distress, vocalising their need for rescue; they're also entirely optional quests that, given your limited supplies, may mean the difference between your own survival or not if you decide to do a Mario. Yet the italian plumber never whipped anyone to death, and that's a potential end to your would-be princess (and loss of extra points come level's end) due to the combo of hectic situations and sometimes clunky controls.

Because unlike Dr. Jones, our explorer will die. Die a lot. There's an infinite amount of retries to attempt a complete run through all the worlds, but each run, but each run will only grant you four hearts - and claimed by attacks from the cavern denizens, dropping into traps or misusing bombs (note: be generous with the expected blast radius). Never has the suicide rate been so high in a video game.

Spelunky is hard, even for those with well-worn gaming habits. There's no easy out in this game. The only way to win is to play well, focus yet still freestyle. You've also got to come to terms that every now and then you'll end up in a darkened cave, a clutched torch the only source of light, and that light only illuminating a few meters either side of you. Ladders can lead to bottomless voids. Jumps are pure lottery. If you're in this situation with only one heart left? Certain death awaits.

The game's much easier when travelling with up to three companions in co-op. You can revive each other, which is a boon. But equally you can also injure or even kill by mistake (or on purpose). Those not paying attention will loose friends quickly as bitter disputes erupt over who made the crucial mistake and led to renewed failure.

Graphics are the timeless pixel art, overlaid by a hypnotic retro synth sound. The style's welcoming and so alleviates some of the hatred that'll inevitably develop. The pinball between the two extremes of love and hate echoes that of Super Meat Boy, another platformer to grind controllers through your teeth to.

A time out comes by of of the deathmatch multiplayer, the polar opposite to the exploratory madness. Faster and more fun than the original Bomberman, a four-player local match is the thing of legend. You can whip, shoot, knife or bomb each other, and so quickly do matches devolve into deathly chaos its almost unfair.

Sadly not available as an online option, it at least relieves you of some stress that comes not only from you're stunted efforts to tunnel through the caves to safety, but also your disbelief of some of the online Rankings that put other players' completion times at a frankly unbelievable eight minutes.

If the harshness of the review seems at odds with the score, it's because of that love/hate, the same juxtaposition garnered by Super Meat Boy. Irritation at repetition is buried due to the random level generator, the gameplay convergence of points, time attack and quick reflex platform skills making for a great old-school trial that, even though we're crushing controllers in mitts with frustration, we can't help but replay over and over. 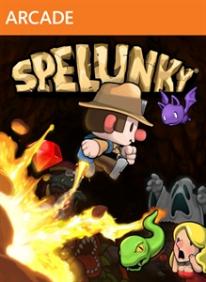