For those, like us, who were born in the '80s, there are two pillars on which much of our gaming culture is built: Nintendo's Super Mario and Sega's Sonic the Hedgehog. These two mascots have entered our collective imagination, becoming a crucial part of contemporary pop culture, albeit with slightly different outcomes over the years. While Mario continues to reign unchallenged in the world of platform games, Sonic was less fortunate after appearing in a number of titles - especially some of the more recent ones - that weren't exactly brilliant. Despite the underlying "rivalry", the two protagonists have even joined forces on several occasions, such as in the fun Mario & Sonic at the Olympic Games franchise. However, for Sonic there was still a missing piece separating him from his great frenemy with a moustache: a movie.

We're not here to retrace the various issues that threatened to define the movie by Jeff Fowler, but Sonic - The Movie has an undoubtedly intriguing backstory. With it almost ready to hit cinemas last year, the film didn't pass a screen test, nor did it survive the attentive eye of the blue hedgehog's fanbase - Sonic's first character design didn't meet expectations at all. In fact, we thought much the same thing when we saw the first images of the anthropomorphic hedgehog - he was a terribly long way from being the funny blue hedgehog with red shoes that can run at supersonic speeds that we all loved so much in the '90s. Fortunately, Paramount Pictures had the foresight to take a step back, rethink and rework Sonic's design from scratch so as to make it more faithful to the original. Now completed, this new-look Sonic has finally arrived. Sometimes it pays to listen to your fans, it would seem.

Thus, Sonic - The Movie whizzes into cinemas and theatres this week, bringing a film that's surprisingly amusing and with enough charm to appeal to fans of all ages. Not only that, but our surprise is also due to the fact that, as we all know, video game adaptations are often not very good. Yet, Sonic's movie manages to convince across the board. Simple in its plot, but seasoned with funny dialogue and plenty of jokes, Sonic - The Movie is an adventure designed to entertain the whole family, delivering the right mix of good feels and knowing winks, something which confirms how delightfully transgenerational a character like Sonic can be.

While it's true that seeing the blue hedgehog on screen was enough to get us in the zone (we think he was less arrogant here compared to his video game counterpart), the star of the movie is undoubtedly Jim Carrey, who plays the part of Dr Ivo Robotnik (Sonic's bitter enemy, also known as Dr Eggman). Revisiting a physical style somewhere between Count Olaf in Lemony Snicket's A Series of Unfortunate Events and Stanley Ipkiss in The Mask, the Canadian actor puts in an engaging performance without ever becoming too clownish.

From a visual perspective, Fowler's movie works flawlessly. The special effects in this live-action movie are perfectly integrated and never appeared unconvincing, and the colourful cinematography gives it a real video game feel. What increases the rhythm is undoubtedly the editing, which clearly draws inspiration from the original games, restoring that same sense of speed and adrenaline we once found in the original source material.

Our only criticism of note was the excessive simplicity of the plot; we would have liked more attention on the conflict between Sonic and Robotnik, which is consumed exclusively by the final boss fight that closes the movie, without ever deepening in a meaningful way beforehand. Maybe offering more background to Sonic and Eggman would have made everything more interesting, but it's also true that the target audience of this movie - even above lifelong fans of the supersonic hedgehog - is kids, so it's likely that this choice depended mainly on that.

Riding on the same wave as movies like Detective Pikachu, Sonic - The Movie confirms that making fun films inspired by classic video games is possible. The curse of the Super Mario Bros. movie seems to have almost lifted and these latest productions suggest that it's possible to balance fan service and original ideas, without ever compromising the source material. Filled with Easter eggs and nods that will likely leave smiles on the faces of fans, Sonic - The Movie is a very watchable adventure for the whole family, and it's a rare win for Sonic in his eternal struggle with Mario.

MOVIE REVIEW. Written by Fabrizia Malgieri on the 14th of February 2020 at 17

Sonic beats Mario in this convincing film adaptation of the popular SEGA series. 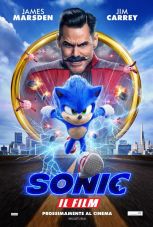