Fan service. Two words that Sega have been struggling with ever since their ill fated Dreamcast console was put to rest. But also two words that make up the foundation of Sumo Digital's upcoming Sonic & Sega All-Stars Racing.

The greatest piece of fan service Sega fans are getting, at least as far as we know, is the inclusion of Ryo Hazuki from the Shenmue games. We haven't seen the enigmatic young man since he starred in Shenmue 2 and hopes of a third game have been squashed time and time again. At least we will get to race with him next year.

When I first learned of the title prior to E3 this summer it was called Sonic Revenge Racing. But somewhere in the PR catacombs of Sega headquarters "revenge" was not a word Sonic would use and the special move that lets all characters take revenge on those ahead of them in the race was renamed All-Star move and the game was named Sonic & Sega All-Stars Racing. Another interesting note was that Sumo Digital originally planned for it to be more of a pure racing game without weapons, but the brass said "let's add some weapons", and the game turned into something closer to what we are accustomed to - a typical kart game. Sumo Digital did keep the basics of the racing from their initial project and it is still very much about drifting and gaining boost.

But let's return to the All-Star move. It is probably the most blatant rubber band mechanic you will ever find. When you are falling behind in the race you get the All-Star move from one of the Mario Kart-esque boxes spread around the track. If you are playing as Ryo Hazuki he will trade his motorcycle for the legendary forklift and you can pick up and throw away your opponents as you pass them by. Beat from Jet Set Radio puts on his blades and uses spray cans to distort the vision of those he passes.

Sonic is naturally turned into Super Sonic and Amy uses her giant hammer. When I tried the game the All-Star move was an all powerful tool that allowed me to move from last to first place in half a lap. However, I'm told that the All-Star move will be tuned down for the final game as Sumo Digital wished to highlight this feature during the demo. And that's a good thing, you don't want the race to be about who gets last place before the final lap.

This Halloween Sega revealed a track based on the House of the Dead series called Curien Mansion. There are also tracks based on Billy Hatcher and the Giant Eggs, Super Monkey Ball, Sonic Heroes and more so far. Naturally there will be a few Sonic themed levels, and there are also a sizeable cast of Sonic characters already revealed including Eggman, Amy, Tails, Knuckles, Shadow and Big.

The game received some criticism for putting the fastest creature in the world - Sonic the Hedgehog - in a car, but I was given an explanation by the developers. They had in fact started out by having some characters race without vehicles, however as the physics impact the racing in a very real way it just didn't feel right. The way it works is that smaller vehicles accelerate faster while the heavier ones are better equipped to ram their opponents of the track. That plus running over a hedgehog with your Eggman car just isn't very entertaining. Or is it?

But the nostalgia doesn't end with visuals and characters. Music is a major component and as Alex Kidd turns on his All-Star move and the theme from Alex Kidd in the Enchanted Castle (my very first Mega Drive game) starts up I can't help but smile. It's not made worst by the fact that his All-Star move includes the pedocopter. The developers revealed that it had been a lot of work getting all the source material for the 20+ characters they wanted in the game as some haven't been around for quite some time.

Among the rumoured characters yet to be revealed are Ulala from Space Channel 5 and Akira from the Virtua Fighter series. When I met up with Steve Lycett, executive producer, I made a plea for Vyse from Skies of Arcadia.

"We get a lot of requests for Vyse", he said with a smile." But what kind of vehicle would he ride?"

I suggested a giant floating ship, but I guess Steve had a point. It may not fit into this game, but then again Sonic does ride a car and so does Beat. None of them would ride cars in their games. I also asked whether there would be a course based on a location from Shenmue.

"We are going for a particular visual style and I'm not sure it would fit", Lycett says. "But perhaps there are locations that would fit." (smiles)

I was hoping for a spiced up version of the harbour from the original Shenmue, but perhaps that isn't colourful enough.

We are back where we started at fan service. Sumo Digital has also promised cameos by characters who didn't make cast and the mission mode will be reminiscent of what they did with Sega Superstars Tennis. Given that Sumo Digital have experienced with racing games with Out Run and Sega characters with Sega Superstars Tennis they must be seen as the ideal studio to pull this off. My concern is that it is too close to Mario Kart in terms of gameplay, and no amount of fan service will make up for it feeling like a clone I'm afraid.

Sonic has taken some of his friends and challenged other Sega characters to some go kart just like a certain plumber.

Rumoured for 3DS, Vita and Wii U.

Sonic's birthday sales is on!

Who pushed the "publish"-button? Who?!

Less than a month until it's out

Kart racing in your pocket 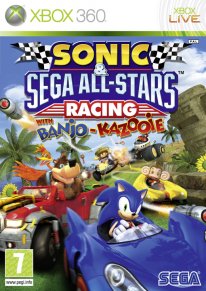