There has been some confusion lately as to the exact number of characters playable in Sonic & All-Stars Racing Transformed. It turns out it's a bit more complicated than just giving us a number and Sumo Digital posted the following at Sega's official forums.

"The thing is, different people think of different things when you say 'How many characters are in the game'.

Why is this? Well some platforms have characters that are unique to that platform. I'm not going to say which, that's part of the fun of the reveals! Some are SEGA characters, some are not. Don't bother asking :P

Playable choices doesn't necessarily equal drivers either. Not as we're talking passengers or hood ornaments, counting those would indeed be cheap, but you know this is game all about transformation, we are doing things with the vehicles that we've not shown you, that are going to really surprise you."

Is Sonic racing set to make a return?

Who is Manager Man?

GRTV: Sonic & All-Stars on Wii U

Check out the footage.

PREVIEW. Written by Gillen McAllister on the 17th of October 2012 at 15

New track and an old foe. 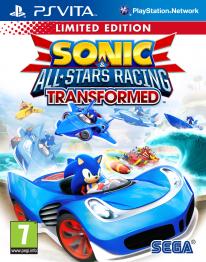