Sonic hasn't had the greatest time in the 3D world, as a lot of entries in recent years have felt a little lacklustre. Sonic Forces is looking to change all that though, and with Sonic Mania already being a hit this year, Sega has a lot to live up to when it comes to this new title, but does it come close to reversing the poor results of the past?

The short answer is a resounding no.

We'll get into the nitty-gritty of where the game falls short in due course, but the premise of the game is simple; your recurring nemesis Eggman has taken over the world and is planning something even more disastrous soon, so you start the game very much on the backfoot. The whole gang, featuring everyone from Sonic to Amy, is on the losing side of this war, and your Forces have to take on the opposing Forces to regain control, comprising of a sort of 'greatest hits' package of villains like Infinite and Metal Sonic.

At the very start something that caught our eye was a kind of percentage gauge showing how Eggman controls almost 100% of the world, and throughout the game this percentage is pushed more and more in favour of the good guys, with swathes of the world map subsequently shifting from red to blue as you work to reclaim the land from his grasp. This poised itself as a kind of grand and ambitious adventure, with the adventure shifting to a battle between two armies rather than just Sonic and Eggman, but the execution prevented this from happening, which wasn't helped by one crucial detail: the game is between three to four hours long.

This short length means that none of the narrative events or big climactic scenes are given any weight or breathing room. As an example, Eggman quite literally takes over the entire planet in just a few minutes, so you're pretty much thrown into doom that doesn't feel all that gloomy, and within the aforementioned three to four hours you've defeated the huge, giant, unbeatable plan Eggman had devised.

What's more is that even with this short lifespan the ending still feels long-winded. Once you think you've got to the final boss, the game throws another two final bosses at you, and the ending is delayed repeatedly in order to try and give some epic scale to this sizeable plan of Eggman's, but it ends up just feeling unnecessarily drawn out; no-one likes too many false endings.

Sonic's modern adventures have always had a bit of trouble with dialogue, as more often than not they've been cheesy, cringe-worthy, and trying to pack 'attitude' into the lines, and the same applies here. Throughout the game, "butt-kicking" is referenced regularly, and all of the interactions aren't just unconvincing but also jar with events that are unfolding. Sonic's quips at everything are a great example of this, as everything Eggman throws at him is met with a sarcastic remark, even when it seems that all is lost in the grand battle.

Modern Sonic isn't the only character you'll play as in the game though, as there's also classic Sonic, who as you'll remember doesn't have a voice at all, and there's your own player-character too, who is also mute. The major appeal of this character, however, is that you can customise them with an outrageous number of cosmetic items (really, there's loads), including Wispons (we'll get to that later), headgear, glasses, bodysuits, shoes, gloves, and more. Along with a very varied colour selection for your avatar, which can also be changed at any time, we were very impressed with how much we could tinker with our hero to make them the way we wanted.

In terms of how each character controls, you're tied into 2D platforming with classic Sonic (he knows no different after all) whereas with modern Sonic and your avatar you switch between 3D platforming and 2D sidescrolling sections, with this shift happening organically as you progress in the levels.

To talk about classic Sonic first, we were actually incredibly disappointed with how he handled, especially after Sonic Mania knocked it out of the park reproducing that classic 2D platforming feel. One of the major criticisms we have is that he just didn't run fast enough to get up some of the ramps in the levels, forcing you to run back down, stop, rev up, and then take it on again, and his overall handling just felt a little light.

The speed is ramped up dramatically when you play as Sonic and your avatar though (sometimes side by side), as the pace at which you move through the levels is astounding. Both of these characters can use a homing attack, activated by pressing jump twice near an enemy, which can take out lines of enemies quickly, and both can also slide through enemies to dispatch them as well. There's a stomp attack to get through floors too, but we found ourselves not really using that too much.

Your avatar's Wispon, however, is a weapon that grants special abilities, one of which is an attack, like an electric whip or a flamethrower, and the other grants you access to new ways of maneuvering around the levels, like a blast that acts as a jetpack, propelling you up in the air to reach new areas and rings. Something we must add is that you can also rent a hero from other player creations online to use in your own adventure, which is a nice touch.

As a result of the highly-effective Sonic boost and the homing attacks, coupled with the weak enemies, chances are most players will find the first 20 or so levels incredibly easy to get an A ranking or higher in, as you can blast through most of the 30 main missions in a few minutes each. Most of your time will be spent pressing right or forward and jump, and that's also how you defeat most bosses, with the occasional Wispon attack thrown in; a formula that became stale rather quickly.

One might argue that the game time would be significantly increased should you take your time to explore and unlock all of the red rings in each level, but honestly we found no incentive to do so. These rings seem purely for completionists' sake, as do the secret levels, and we would've rather progressed through each level than slow the pace right down to reach the nooks and crannies needed for some of these collectibles.

As you may have gathered, we didn't find much replayability in the game once the credits rolled, as the only reason to replay these levels is to either grab all of the collectibles or to increase your score. On top of the main 30 missions in the game, there are some secret levels to explore as well, bite-size sections of platforming for some extra rewards, but again these didn't offer much in the way of substance.

Sega's incentives for replayability do come in the form of missions (some of which are daily), and these tasks you need to achieve to unlock more content like customisation items for your avatar. These missions range from changing your character's gloves to completing a stage with an S rating (higher than an A rating), so your first playthrough of the game will most likely leave you drowning in cosmetics at the end of each stage as you complete missions and unlock about five at a time.

In terms of the environments you'll get to see during your time with the game, as well as the level designs themselves, everything works very well. Obviously, these are all incredibly linear running paths, but the environments look shiny and there's always stuff to stop and explore should you want to look everywhere. The reimagined classic levels like Green Hills and Chemical Plant are a nice bit of fanservice too, and contrast nicely with the giant scenes you find with the 3D sections, although a little more variety would've been nice, since environments are recycled as you revisit locations.

These levels never throw much up in the way of challenge and variety, as the rail grinding, watersliding, and more that's thrown in to spice up the normal running is all relatively straightforward and a fleeting change. This simplicity extends to the bosses as well, which are mostly taken down by repeatedly doing a homing attack or through quick-time events (in fact, if you're not a fan of quick-time events then you might find yourself shuddering at how often they occur here).

As much as the songs in the game are kind of cheesy to match the family-friendly nature of the game, we actually found ourselves liking the mix that the game provides. In the classic Sonic levels, for instance, the music goes all arcadey to match the retro vibe that's going on, but then in the 3D sections the music is much more modern and fast-paced, incorporating elements of drum and bass, with a cool little song about teamwork playing whenever your avatar and Sonic do a double boost (yes, we know it's cheesy too, but we quite enjoyed it).

Unfortunately, the moments where Sonic Forces shines are few and far between, and chances are you'll forget about these once the credits have rolled. With such a short length, an undercooked narrative, limited replay value, and simplistic and repetitive gameplay, Sonic Forces doesn't come close to restoring Sonic's reputation in the third dimension, and perhaps suffers even more with it coming mere months after Sonic Mania did such a good job.

Gamereactor UK
+
Loads of customisation options for your avatar, Level designs are fun and polished, Soundtrack is great.
-
Very short (3-4 hours), Little replay value, Ambitious storyline feels undercooked, Characters have cringe-worthy dialogue, Classic Sonic doesn't control well, Simplistic and repetitive gameplay, Not a lot of variety in what you do.
is our network score. What's yours? The network score is the average of every country's score 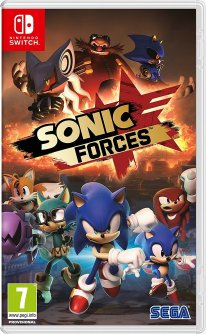