Writer Sebastian P. Husher and his family have gone missing. Left behind is his seemingly normal, seemingly empty house, standing like a body without its organs, now but a sturdy skeleton deprived of the life that used to reside within. Something's not quite right at the Husher house and the disappearance of Sebastian has his editor and his assistant worried, resulting in the latter being sent to investigate the disappearance and eventually suffering the same fate.

People venturing past the open door of the Husher house are vanishing and it's up to you to find out why. Upon starting Song of Horror, you'll get to pick a character from a list of four people, a list which expands across episodes (although we will focus this review based on the first episode), each with different personalities, helpful gadgets, light sources, and mental and physical traits. Then you send whomever you choose into the Husher house.

The differences between them alter the game somewhat, with some, for example, having a strong psyche and thus being able to keep calm in instances of normal or paranormal stress. Another might be physically strong and thus be able to fight back against evil with greater ease. The difference in starting items also alters how you will approach various potential problems that occur, such as taking a swig from a hip flask to calm down, sensing evil before it comes at you, or going through your personal notebook to aid you during tough puzzles.

The game is set up like a mixture of three genres. It plays like a puzzle-based point and click-like adventure while presenting the player with a true horror atmosphere, and it makes for a very interesting experience. You will go through the rooms of the Husher house and pick up items, solve various puzzles by either combining items or going through previously picked up notes for clues, and search for keys to get further into the menacing building while the story and bigger picture gradually appears before you. You do this while at the same time avoiding the unnamed presence that has taken the place of the Husher family.

The presence is always looming, lurking in the shadows, and if you're not careful, it can grab a hold of you and end the life of your chosen character in an instant and there's a particular catch to the death of a character - you see, once one of them has been taken by the entity, the character is gone forever, forcing you to pick another protagonist, find and grab the fallen one's collected items, and pick up where they left off. Once the characters are all gone, you have to start the episode all over.

To combat the potential death of your favourite protagonist, you have to be cautious and pay attention to your surroundings and there are plenty of ways to do so. The presence gives off cues to help you avoid it, such as alerting you with an odd noise through a door (each door you have yet to open will give you the option to put your ear against it), a chill down your spine, or escalating noises prompting you to hide. You do so in closets, which are located around the house, letting you hide within (plus each one discovered shows up on your map, as do unsolved puzzles and locked doors). The game, at times, tries to trick you as well, dangling a supposed pick up in front of you before devouring you whole.

Should the presence take you by surprise, be it by trying to get into the room you're in through the door or into the closet you're hiding in, there are two mechanics to learn. The former has you tap A on your controller until your character has closed the gap in the door enough to slam it shut by pressing the right trigger, and the latter has you time your heartbeats by pulling the two triggers in time with your pulse.

The atmosphere in the game is thick and the unscripted nature of the presence and the differences in the characters kept us on the edge of our seat, and the soundtrack and the sound design is impeccable. The puzzles are also challenging in a way that resembles the older Silent Hill games, specifically Silent Hill 2, and you'll find yourself searching the house for clues throughout and, considering the limited areas available, it doesn't get tiresome. Unlocking more areas as you go is satisfying and finding the solution to a puzzle gives you a feeling of pure triumph while still keeping you on edge as you wonder what will be waiting for you when it's finished.

The game is split into episodes, with five episodes planned. The first and the second episodes are available today (the second changes up the theme and setting somewhat, and we'll share impressions of that in due course), and the rest of the episodes will release in December, January and March respectively.

We did note some frame rate issues, however, more frustrating were certain instances where we felt misled and where we permanently lost characters that we would have liked to have kept alive. That said, the frame-rate issues weren't too distracting and the misleading sequences can technically be seen as an added layer of immersion through trickery. A few blemishes aside, Episode 1 of Song of Horror is a solid horror experience with a unique twist, but it's also a love letter to horror adventures of old.

"Song of Horror is a solid horror experience with a unique twist, but it's also a love letter to horror adventures of old."

It was previously due to release in October 2020.

It was due to hit PS4 and Xbox One later this month.

Finding the Right Pitch - The Origins of Song of Horror

With the final chapter looming, we talked to the creators behind episodic horror game Song of Horror and found out more about the game's path to completion.

Song of Horror's fifth episode gets May release date

The final chapter in the episodic horror series is set to launch in just a few weeks.

Exclusive: Check out the new Song of Horror trailer here

With the final episode looming, Protocol Games has released an atmospheric trailer to get you in the mood for more tuneful horror.

Watch us play through Song of Horror: Episode 4

We've got three more spine-chilling episodes of our ongoing let's play series for you to enjoy. 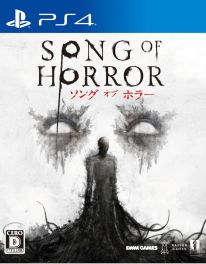