"Just to clear things up, the Snake cameo video that we showed during Tekken finals was our idea of a little joke. It was not intended to imply a character reveal, and was done on our own, without consulting Bandai Namco. Sorry for any confusion!"

Evo 2019 had plenty to talk about this past weekend (catch up with all the esports results here), but Tekken fans had a little bit extra to be hyped about, as they received a brand new trailer for Season 3 of Tekken 7.

Zafina from Tekken 6 will be returning this season, but Leroy Smith is a name you won't have heard before, since he's a brand new fighter looking to join the battle. You can check both of these characters out below, with Zafina arriving in September before Smith comes along in Winter.

That's not all though, as footage posted from the Evo event on Twitter by users like Fadel showed a brief teaser hinting at Metal Gear Solid's Snake coming into the series as well. This wouldn't be his first foray into fighting games either, as he appears in Super Smash Bros. as well, and with The Walking Dead's Negan also in there, who knows what could happen.

This is only speculation from a brief teaser though, but considering all the reveals so far, it seems likely that Snake is coming along for the ride. Would you like to see him in Tekken?

The competition has come to a close once again, and Chikurin defeated several big names to come out on top.

Zafina is kicking things off, and there's a free update landing the same day for all players of Bandai Namco's game.

All Tekken soundtracks are now on streaming services

Celebrate 20 years of the series with all of the music from the games, as revealed by Bandai Namco. 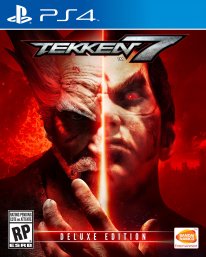