After recently revealing a launch date of April 28, Focus Home Interactive and Saber Interactive have released another trailer for SnowRunner that shows off the many challenges you'll have to deal with.

Taking place across the extreme landscapes of Alaska, Michigan, and Taymyr, you'll be driving a variety of vehicles over rivers and up steep icy mountains to help make the land more habitable, rescue trapped cars, and transport cargo.

The good news is that you can rely on your buddies for assistance if you get stuck, with up to three other players who can help you tackle the extreme forces of nature that have a ton of detail packed into them.

SnowRunner will be heading to PC, PS4, and Xbox One but only as an Epic Store Exclusive for now with no information regarding a Steam release.

If you're really up for it then you can pre-order the standard or premium editions right now. The difference between them is the season pass, which features an exclusive fancy Sabertooth skin for the Heavy Duty Derry Longhorn 4520 truck and also has a bunch of new maps, vehicles, missions and other skins that haven't been revealed yet.

Will you be facing the cold, tough challenges of SnowRunner when it releases in April? 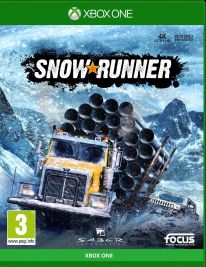