The sniper genre's comfortably nestled in its own niche. Area-length kills that have absolutely nothing to do with luck. Patience. More time on knees and elbows than feet. Skulk rather than run. Lethal voyeurism. And frustration.

Ghost Warrior 2 subscribes to all of those, though the frustration is at the player's discretion. Fouling a kill and alerting the surrounding troops results in slammed controllers and f-bombs scattered like machine gun fire across the room. Before we finish our afternoon session at Namco Bandai's offices, working through a variety of sections early in the game, the air will turn very blue indeed.

We spend the session in deep jungle, assessing a series of increasingly complex enemy outposts before committing to a strike. There's a similar cycle to each: confirming troop locations and patrols by sight with arduously slow crawls, circling round the area to spot clear lines for scoped sight. The aim, the held breath. The shot. Then either continued silent killing sprees or scooting to another hideout until alerted enemies calm down.

Alerts leads to your position being overrun in short order, requiring a hasty retreat. At that point you're spending as much time watching the on-screen radar for enemy sight lines as foliage slapping against your eyes, as you crouch within spitting distance of your would-be-killer. Tense yes, but enemies rarely strategise past swamping the nearby area before eventually returning to their regular positions (albeit on high alert).

It's a cycle repeated for most, the exceptions those scenarios where we're forced into sneaking through encampments, or protecting an escapee from on high. Meticulous planning is needed, as checkpoints are spaced well apart, and while you may have the option of a pistol alongside the sniper rifle, the game's nature doesn't conform to rushing back through sections, however well-mapped they may now be in your head.

Perfect shots at least offer some consolation in repeated viewings: bullet cams snapping across a clearing and striking slow motion as they punch through their targets. More so when you hit a two-for-one.

Initial skirmishes conquered, the game starts liberally tossing in variations on the theme. A forced sweep through the heart of a heavily-fortified enemy base, holding behind cover and clambering over stairwells as various patrols wheel back and forth around us a foot's space from our nose, feels a necessary evil, though will appeal to those who ghost in stealth titles. More satisfying is a mountain-side takedown of another base-full of enemies as we provide cover to an escaping comrade-in-arms.

Our session ends with a two-part mission inside a valley festooned with rope bridges, static and roving patrols, as well as a searchlight sweeping the area in its entirety. It's a deft reverse of the previous section, as our comrade is now the one giving recon from on-high. The fairly linear progress around the valley's rocky circumference given spice by sudden radio chatter to halt, hide or run. Faith entirely in our eyes in the sky, rather than the limited few we have in the gloom.

It's only in the second part that we find the mechanics, or at least the explanation of what's needed, not as deft as the storytelling wants it, wants us, to be. As a patrol's distracted by our spotter on the far ridge, we need to take the measure of shooting a grenade attached to one of their belts from our hidden recess in a wall behind. At least, that's what we presume is the direction intended: we die multiple times (thankfully this area at least sets us back barely thirty seconds before the stand-off) before shooting in the general direction of the hunched figures in front and get the clear to move on.

Explosion set off and camp alerted, we rush over to our teammate and hunker down in a makeshift bunker to set explosives as bullets hammer down on our position. We rig the area to blow, and make our escape. We know that's the plan, as we watch a player beside run with that strategy: for us the demo ends prematurely, a bug stopping us from doing anything but letting the bullet rain punch through our character's body.

Bugs we expect with preview codes, but the uncertainty of the next needed action in the sequence prior was frustrating, and a check with those around us saw the same mystified expression as to the unwarranted grenade puzzle.

The game's cooking on the newest build of the CryEngine, and fauna-wise the jungle's rendered with a decent enough approximation to sell the illusion, if not to give you pause to soak in the atmosphere (who has time anyway when you're trying not to die before the next checkpoint?), and those areas we played, we were aware of the limitations to our movements within them - hopefully the full game will open up with time, and City Interactive will show us a variety in missions that means the solo load-out will be utilised imaginatively. At least that'll give us reason to persevere, rather than toss joypads at walls in anger.

Players are reunited with ace-shot Cole Anderson as he battles deep behind enemy lines, picking off any number of terrorist antagonists.

Siberian Strike out now on Xbox, PS3 and PC.

It's time to get sniping in Siberia.

PREVIEW. Written by Gillen McAllister on the 5th of December 2012 at 11 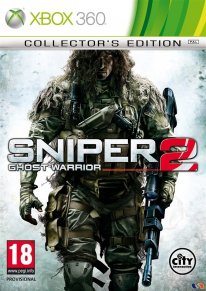