Konami reports that Metal Gear Solid: Snake Eater 3D has been delayed. The port of the well received Playstation 2 title, was originally planned for release late this year worldwide, but now it will only be out in Japan before the end of the year, while we are going to have to wait a little longer. Konami has not given any reason for the decision to delay the game over here, and one would assume all the localisation was done years ago. 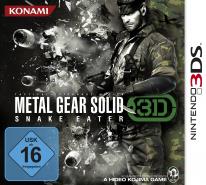