During my first hour with Sly Cooper: Thieves in Time I am struck by two things. First, how nice it actually is to re-familiarise myself with Sly and his friends. I hadn't realised how much I'd missed them.

Second, although it is not Sucker Punch behind Sly's latest adventure, everything feels very familiar already. The music is jazzy, the atmosphere almost cozy, and the iconic sound effect played when Sly sneaks behind someone is on cue. New developer Sanzarus Games has treated the franchise transfer with kid gloves. There's no new excesses or concepts, just because it's considered common practice today to include co-op, destructible environments, regenerating health and having to explode a hundred enemies with one rocket launcher strike to unlock a Trophy.

Basically Sly Cooper circa 2013 looks and feels like Sly Cooper in 2005. Something that might annoy some, and when compared to his platform cousins Ratchet & Clank - whose arsenal only grows with each new game - it may feel stagnated, but the regression is something I appreciate.

After seeing Lara bruised, battered, impaled and crushed approximately fifteen hundred times in Tomb Raider, and previously having massacred as many cyborg ninjas in Metal Gear Rising: Revengeance, my ten hours with Sly Cooper: Thieves in Time has been clean-cut recreation. Sanzaru retained the original ingredients from the previous games when they concocted Thieves in Time. They've taken a huge adventure, stirred in a generous handful of exploration, spun some charming dialogue. A classic and well-tested recipe that, in today's action-oriented climate, feels instantly fresh.

This time, the plot revolves around time travel. Someone steal valuables from Sly's relatives during different time periods, causing the contents of Sly's Family Guide, Thievius Raccoonus, to start disappearing. With the help of a time machine Sly goes on a journey through history to try and fix things.

Time travel is a perfect excuse to incorporate wildly differing environments. During the surprisingly long adventure, I visit places like feudal Japan, medieval England, a wonderfully coloured Wild West and a congenial ice age. Each era has a hub world that's free to explore with any character from Sly's gang. As in previous games, there is a lot to collect. (A situation that stressed me out, as one map I was still missing twenty-three bottles: it ended up with me focusing exclusively on story missions).

In every era, we encounter a new relative of Sly. In Japan, we have Rioichi, ninja and original creator of sushi. In the Wild West, we meet Tennessee; sharp-shooting "outlaw" who is wanted by the Sheriff. All Sly's relatives are playable and possess their own special abilities. You will have time to play as nine different characters, which adds a lot of variety in the game. But personally I would have liked to put more focus on Sly. Dig into the game and he starts to feel like a supporting actor himself, and the experience a little fragmented.

The single most annoying factor in the game is the loading times. I've stared at loading screens before and it does not usually bother me, but it's been a long time since I have had to wait so long, and so frequently. We're dangerously close to the "can I make a sandwich?" clock watching on display here.

Getting back into the game quietens the curses though. The dialogue is strong and entertaining enough to pull a smile back onto the face. The voice actors do a superb job of delivering their bickering observations in each and every line of dialogue.

With Sly Cooper: Thieves in Time Sanzaru Games proves that they are fully capable of taking a firm grip of the franchise from its creator. It plays much like a Best Of collection, and that's an agreeable design choice. This is a varied, beautifully coloured adventure that feels refreshingly old school - and it's even being sold at a discounted price (£29.99). If you, like me, are after a game that's a little more comfortable with the lighter side of life, then don't hesitate in picking this up.

Gamereactor UK
+
+ Varied + Plenty to explore + Charming characters
-
- Horrible load times - Sly feels like a supporting character at times.
is our network score. What's yours? The network score is the average of every country's score

During my first hour with Sly Cooper: Thieves in Time I am struck by two things.

A two-part look at Thieves in Time on PS Vita.

Set for release on March 27.

Plus a stack of screens.

Gameplay shots for thief's next outing. 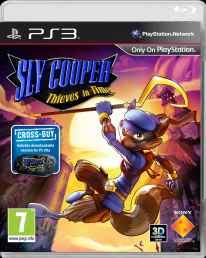