Skating as a magnificent bird is something that all video game enthusiasts have probably had a desire to do at one point in time. Being able to flip and trick, while tweeting away just seems like something gamers would be all over, with that presupposing that the game is good, of course. When it comes to Skatebird, which is the closest a player could come to this desire, the dream is hardly captured in the way I had hoped. On the contrary. Those who have played one or more games from Tony Hawk's Pro Skater series will quickly see Skatebird for what it is. In other words, it's not like Skate at all. There are buttons to grab your board, grind, do a flip and other things you expect to be able to do, and the controls feel very much like Pro Skater. But, the fun of that series is unfortunately not nearly as present here.

Skatebird allows you to create an avian skater from a broad range of options. When the adventure starts, you can choose between different kinds of birds to play as. Owls, parrots, a raven, a kookaburra, the list goes on. In addition, you can decorate your bird with headphones, a Roman helmet, fisherman's hat, goggles, scarf, necklace and, of course, your skateboard. It's highly unusual but also very fun.

But with a game as strange as this one, where does the story take us? After Big Friend has ended his career as a skater, the bird gang is tired of their boring lives. This is where your cool bird comes in as it is up to you to bring some joy to their lives again with sick tricks. The story is, as you might guess, insignificant and serves more as an excuse for you to be able to take on the role of a skating bird. And as for how your friends fit into it, they will ask you to do different things to impress them, or to open the way to a new "skate park".

There are five different levels, i.e. skate parks, available to visit, with the first being a bedroom that you have turned into a skate park. Pizza boxes serve as ramps and bowls filled with noodles provide grinding opportunities. As you might expect, these are not normal skate parks that the birds are at, but just what you would expect birds to have done, if they were skating in reality.

I played a lot of Tony Hawk's Pro Skater 3 when I was younger and I really loved it. The desire to explore and try on all sorts of missions was great, but that desire never really shows up in Skatebird, even though the two games are basically so similar to each other. Just as in the case of Pro Skater, there are a variety of smaller missions to tackle and there are also collectibles to collect. Perhaps the problem is partly that the environments never feel inviting, as Skatebird is not very beautiful. The textures are sticky and nothing looks visually striking. It does not get any better because the image update on the Nintendo Switch is sometimes way too low, which often becomes a big problem in a game that relies a lot on timing and precise controls.

As for the controls, they're hard to wrestle with. The areas in which the game takes place are often quite cramped and you'll often skate straight into a wall, getting knocked off your skateboard, as the analog stick is so extremely sensitive. And then when you then get up again, there have been several times that my bird has gone headfirst right back into the same wall falling face first every single time that I even marginally collide with a wall. Considering this can have major consequences in missions that work with a time constraint and you'll find yourself restarting missions for things that hardly feel like your personal fault.

Given Skatebird's charming and cozy design, the chances are high that this is something that will mainly attract a younger audience, which I also think is a bit of a shame. To be completely honest, I think Skatebird is much harder than it should be. The timing is not always there for various reasons and the information on how the game works is very scarce. Should a nine-year-old test the game, there is a great risk that it would fall headlong into the ground a dozen times, and then never touch the game again.

What Skatebird does well is the colourful design and its many choices to customise your bird and board. The dialogue is also permeated by a refreshing humour that makes you giggle a bit between missions. Unfortunately, it is not enough when you look at the whole. Some of the problems mentioned are certainly subjective and may be of less relevance, should one play the game on any other platform, as our review is based on the Nintendo Switch version and based on that I can only state that Skatebird is a pure and simple disappointment that in advance looks so damn unique and entertaining. In fact, it is more frustrating than it is amusing.

Gamereactor UK
+
Lovely design, humorous, many choices in the creation of the character.
-
Really ugly, poor responsiveness, inaccurate and tough game controls.
is our network score. What's yours? The network score is the average of every country's score

REVIEW. Written by Henric Pettersson on the 21st of September 2021 at 14

We've taken Glass Bottom Games' avian skater for a spin, and we've got plenty to chirp on about it.

We're taking to the board within SkateBIRD on today's GR Live

Watch us pull off some stunts playing as an adorable cast of feathered skaters.

SkateBIRD has been delayed until September 16

It was originally intended to kickflip its way onto PC and consoles on August 12. 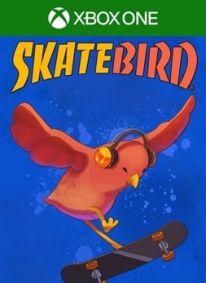