Shovel Knight is one of the smallest games I've played in a while. That's not a measure of its longevity, as with a six hour playtime it beats plenty of titles on the market. But weighing in at just over 200 MB it's a game that took me about a minute to install on Steam. But don't let its size fool you - this is a powerhouse that contains lots of gaming gold if this sort of throwback title is your sort of thing.

But who is this shovel wielding knight? Turns out he walked from country to country and beach to beach with his trusted companion Shield Knight. But one expedition to the Tower of Fate did not play out according to plan and the two heroes succumb to the dark magic of the tower. As the Knight awakens the Tower has been sealed and his companion is nowhere to be seen. Brokenhearted and robbed of his adventurous spirit Shovel Knight retires to the countryside. But soon enough the dark powers of the Tower of Fate begins to spread across the land. Largely a result of the actions of the eight knights of The Order of No Quarter. When the Knight hears that the witch living in the Tower has opened it up to spread evil, he decides to go on one last adventure.

At first glance you can mistake Shovel Knight for having been created for the NES back in the 80s. But that's on purpose. Shovel Knight is more or less a love letter to an era when things were simpler, yet games were not necessarily any simpler than they are today. And while similar tributes in recent years (such as Evoland) lost our attention after a while, Shovel Knight manages to keep our attention from start to finish.

Why is that then? The main reason is that Yacht Club Games never loses sight of their ambitions or inspirations. While other retro-inspired games often lacks a well defined sense of direction and goal, or simply tries to be too much, Yacht Club Games manages to strike the perfect balance throughout the game. The objective was clearly to create a game that recreates what you felt when you've played one of those NES classics back in the day, and they do so by achieving a masterful balance of the three most important elements of those days - a clearly defined design, solid game mechanics, and awesome music.

It's not just the art style and the technical aspects of the graphics that betray its NES inspirations. The game mechanics also bear witness to the hours and hours the developers must have spent playing NES games. Mega Man is without a doubt the main source of inspiration, from the opening menu, the levels themselves and the boss fights. You fight your way through a level with a specific theme and its many enemies, and at the end of it you face a boss in a closed room. Thankfully, Mega Man isn't the only inspiration. Other games like Castlevania, Super Mario Bros. 3, and Zelda II: The Adventure of Link have left their mark on the game. And the pogo stick from Duck Tales makes a guest appearance, even if it in this case naturally comes in the shape of a pogo shovel.

As the title implies the shovel is your main weapon, but there are also a few extra weapons to collect and upgrades to unlock along the way. And you're going to need them as Shovel Knight is a truly challenging game. And we're not talking about the sort of challenge you'll find in Dark Souls, but the sort of NES precision where jumps made a pixel too soon may result in your immediate death. Good then that you don't lose a life when you perish, but only money and these can be collected as you return to where you died. You will die a lot in Shovel Knight and people with a tendency for high blood pressure may what to look elsewhere for entertainment.

All of that said the best aspect of Shovel Knight is its brilliant music - a strong candidate is we some up the best soundtracks of 2014. Inspiration from the Mega Man series shines through, and that is perhaps not surprising as composer Jake Kaufman (Contra 4, Red Faction Guerrilla and Duck Tales: Remastered) has been aided on some tracks by Manami Matsuma, who scored the very first Mega Man game. Regardless of what level you're playing, the music is always in perfect tune with the action, and playing Shovel Knight with the sound turned off must be considered a deadly sin.

Is Shovel Knight then completely without issues? It's easy to come to this conclusion, but if you take a few steps back you can spot a few weaknesses. The most obvious one is that this is clearly a game you will either love or hate. If you're not into retro-styled games and feel the NES visuals are simply a gimmick, or if you have no relation to the old games it was inspired by... well, then Shovel Knight may come across as a completely irrelevant and uninteresting game. Then it's simply not a game for you.

But even if you love everything that the game offers, it's still difficult to be perfectly happy with the original control scheme on PC. The game also appears on Wii U and 3DS, and to be perfectly honest those platforms may be preferable. Even with adjustments made - it is difficult to set up a precise and functioning control scheme on keyboard - and if you mean to play this on your PC you should seriously consider getting a controller.

If none of the above has scared you off, then there's no reason to hesitate getting Shovel Knight. In spite of being frustratingly difficult this is one of the most entertaining platformers I've played in a long time. And the nostalgia factor certainly doesn't hurt. If you long for a gaming experience that offers a trip back to those good, old days while you're waiting for Mighty No. 9 the Shovel Knight is a game you need to play.

Gamereactor UK
+
Hits all the nostalgic notes, Great old school challenge, Legendary music, Wonderful combination of a bunch of elements from NES classics, Well crafted visuals, Good old fashioned fun.
-
Not optimised for PC controls, You either love or hate this and if you don't enjoy a challenge or if you're not a retro fan this one's not for you.
is our network score. What's yours? The network score is the average of every country's score

"It's on the brink of being a must-have title, and it comes highly recommended."

REVIEW. Written by Ingar Takanobu Hauge on the 30th of November 2014 at 18

"In spite of being frustratingly difficult this is one of the most entertaining platformers I've played in a long time."

It's been more than four years since the adventure started, but we'll have to wait bit longer to see how it all ends.

There's a discount to celebrate the occasion. 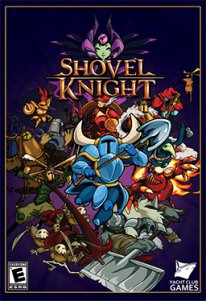