It has become more and more common for popular video game franchises to be turned into board games, and next in line to get this treatment is Shovel Knight, which has a crowdfunding campaign going on right now via Kickstarter for Shovel Knight: Dungeon Duels.

The campaign has three days left to go and has already passed the bottom limit as well as several stretch goals, which is hardly surprising given the popularity of the series, which is on a number of platforms ever since its initial release in 2014.

All of this funding basically means that backing it will give you one of two editions of the game (one with cheaper materials and one more luxurious), with a planned delivery set for September next year.

The concept seems highly original and captures a lot of what makes the retro game so great, so if you're interested be sure to take a look at the game's Kickstarter page to see if this is something you'd like.

How often do you play board games?

"It's on the brink of being a must-have title, and it comes highly recommended."

REVIEW. Written by Ingar Takanobu Hauge on the 30th of November 2014 at 18

"In spite of being frustratingly difficult this is one of the most entertaining platformers I've played in a long time."

It's been more than four years since the adventure started, but we'll have to wait bit longer to see how it all ends.

There's a discount to celebrate the occasion. 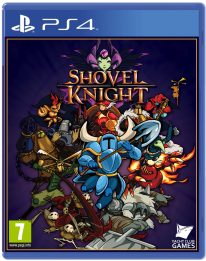