The launch of Nintendo Switch on March 3 is approaching fast, and one of the games that will be there, if not on day one, at least soon thereafter is Shin'en Multimedia's Fast RMX.

We were able to ask CEO Manfred Linzer about this new project from the veteran German indie studio.

How would you position Fast RMX in relation to Fast Racing Neo? The title doesn't make it sound like a full on sequel, but what can we expect in terms of new versus returning content?

Our both games share a common ground but due to the new Nintendo Switch platform we had a lot of opportunity to make everything fresh and even more exciting.

Let me tell you a bit about the history of the game. FAST Racing Neo was a Wii U exclusive. It was first distributed on the eShop only and later licensed by Nintendo for retail publishing. Despite being a hit title it only had limited visibility as the Wii U userbase was limited. So for most players anything in Fast RMX will be brand new.

Anyway, compared to the original Wii U version we almost doubled the content and added a lot of new visual effects and many general improvements. Especially we made sure that Fast RMX fells like a real Nintendo Switch game, rebuilt from the ground to match this fantastic piece of hardware. Fast RMX is certainly one of the best playing and looking games you could get for your Nintendo Switch.

Was there anything in particular you learnt from the reception or
development of Fast Racing Neo that steered the direction of Fast RMX?

We learned that there is a huge diversity in what players want from the game. Some dig into the Online modes and love to increase their Online Score and compete in Matches. Others love to play on the TV with their families in multiplayer modes. Many players look for a big single player experience and want simply a large amount of great racing tracks and unlockable vehicles to explore. So we put a lot of work on all these aspects and made sure everyone is happy. Fast RMX is not a one trick pony but combine all this stuff into a great package.

What you say given all your experience with the genre are the key things that you absolutely have to get right when making this sort of futuristic anti-grav racer?

There are a lot of things needed but perfect controls are truly essential for this kind of game. We almost worked a full year on the original game to get to a point where anyone could pick up the controller for the first time and have fun from the first minute. On the other side you can dive deeply into the controls to get the edge over your opponents.

As the Nintendo Switch offers so many play styles and controls we kept them always in the focus. Playing with the Switch means you can change your play style or controller any time and we made sure Fast RMX makes it as simply as possible to do that. You can even setup your own controller layouts. That even works for every player in the local multiplayer mode.

Given your long relationship with Nintendo what are your thoughts on the Switch? Both in terms of the concept and what the hardware is capable of.

For us, the Switch is certainly the coolest gadget Nintendo ever did. When you hold it the first time in your hands you are amazed how perfect everything feels. Everything is so slick and cleverly designed. We haven't played a lot of Switch games yet but for Fast RMX when playing in handheld mode it looks brilliant. But when you change to TV mode and experience the same game on your HD TV in 1080p and still 60fps it blows you away.

You were able to squeeze quite a lot out of the Wii U with Fast Racing Neo. How would you say Switch compares to that?

On Wii U it was tough to get to the visuals we wanted at 60fps. We had to use a lot of tricks to make it happen at all. For instance, on Wii U we were able to pull off two player split-screen racing at 720p and 60fps. Not bad at all, but with three or four players we had to scale down 30fps. Well, most racing games today don't even feature split-screen at all, so we didn't felt too bad about it. However, on the Switch we didn't had that limit. On Nintendo Switch in TV mode we now have four player split-screen, at 1080p and 60fps with much more details enabled. For worst case scenarios we enable dynamic resolution scaling to make sure the game keeps 60fps in unforeseen situations, tho that's usually not something you can spot.

Fast RMX takes full advantage of the many ways in which to play with other people on Switch; splitscreen, locally in handheld mode, and online. What do you think of the options afforded by Switch in terms of multiplayer and how important has this been to your game?

It's been central to our development. After understanding what the Switch really offered to gamers we tried to make it feel all natural. You don't have to think about when playing. Just do whatever you want.

For split-screen multiplayer we also support all controller combinations for up to four players. You can also play with up to eight players online on the internet or you can connect up to eight nearby Switch stations for local matches.

Will you offer download play where only one player needs to own the game?

All players need the game.

Much has been made of the 3D Rumble that the Joy-Con offers. Is this something you're taking advantage of in Fast RMX and if so, what does it add to the game?

We recently added HD Rumble to the game and it made a big difference. For instance, when you get in contact with something you now feel where it happens and what happens. It's not a simple On/Off rumble but you get tactile feedback about the position, where your vehicle really touched something. It adds a lot to the immersion.

Are you considering post-launch DLC and if so how is the Switch set up for that?

We think Fast RMX is a big package of fun that feels 100% complete. We included all the content we were able to create. So for now we concentrate on the release of the game.

"If you feel the need for speed, this is as good as it gets on Switch right now."

Fast RMX reveals a flaw in the Switch

The issue affects the GPU.

Here's how Fast RMX looks on the Switch

We race on four tracks in Shin'en Multimedia's Switch-exclusive.

Shin'en opens up on Fast RMX and Nintendo Switch

We caught up with Shin'en Multimedia's Manfred Linzner to learn more about the game and what Nintendo's new platform offers.

Shin'en: "Switch is certainly the coolest gadget Nintendo ever did"

German developed is high on Nintendo's new hardware as they work on Fast RMX.

The next futuristic racer from the German indie outfit. 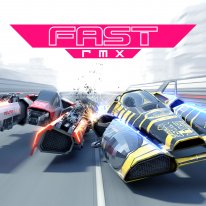