During today's Nintendo Direct, we saw a new trailer that showcased gameplay from the upcoming Shin Megami Tensei V. But not only that, we got a launch date as well, which is November 12. The game will be console exclusive to Nintendo Switch, and in the trailer, we got to see what the "other world" looks like with a devastated Tokyo where demons and angels fight.

If you are not familiar with the game series before, you should know that this is the main series where Persona has become a more famous spinoff. There will therefore be very great similarities between the two series. Shin Megami Tensei has usually been more focused on the battles while Persona is a more purely Japanese role-playing game with a strong focus on the story. So if you liked Persona 5, this might be something to check out in November.

Shin Megami Tensei V to be released in November

Check out the new trailer here as well.

Shin Megami Tensei V releasing for the Switch in 2021

The team will put more work into the game's demons.

Shin Megami Tensei V is heading to the West

English version of the reveal trailer posted by Nintendo.

Shin Megami Tensei V is renamed via a teaser trailer

It's the game formerly known as Shin Megami Tensei HD.

A western release has yet to be confirmed as details are very scarce. 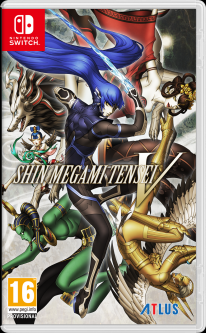