Atlus released Persona 4: Golden on Steam last year, giving many players the opportunity to catch up on this strong JRPG that was previously only available on the PS Vita. Admittedly, the developers did not pay much attention to the PC version, but still achieved considerable success with their work. To us, preserving these old games is even more important than selling copies because anyone who wants to play Persona 4 nowadays can do so easily with a computer.

The fact that Shin Megami Tensei III: Nocturne is soon to be (re-)released on PlayStation 4, Nintendo Switch, and PC is fantastic news from a game-preserving standpoint. However, the high price point is positioning the Remaster right next to new AAA releases and that's difficult to justify when you look at what Atlus did to bring back this adventure. Since SMT3 has an estimated play time of around the 80 hour mark and multiple endings to experience, you will get quite a bit of playtime out of your 50 to 70 euros. On the other hand, the developers even offer DLC in a separate package which does leave an odd aftertaste if you ask me.

Leaving this discussion aside, SMT3 is undoubtedly a game that was ahead of its time. Atlus tells a complex story about the end and rebirth of our world. We start our journey as a mere student who is fortunate enough to escape the ruin of humanity with a few of his classmates, only to become a toy in the hands of some higher powers. It's easy to see why Nocturne has intrigued so many players over the years because you get lost in this unique and very different, post-apocalyptic atmosphere that oscillates between boundless ambition and sheer hopelessness.

Shin Megami Tensei III: Nocturne uses its own language to cryptically talk about character classes, daily tides or energy of life. Since most of the key characters speak to themselves, it is not an easy task to follow the game's explanations, especially in the early parts. But as soon as you get behind the strange terminology, the game discusses philosophical worldviews and complex motivations. At the same time we are given the strength to shape the future ourselves but to stand up for your ideals, you'll require even greater willpower.

If you want to experience Shin Megami Tensei 3 today you should arrange your calendar properly, because the game is very grindy. In most areas you will be frequently attacked by random groups of monsters who battle it out in turn-based fights. This RPG includes almost 200 demons with individual strengths, abilities and passive effects. In 2005 there were no comfort functions that tell us which attacks to use in order to get an advantage and that's the reason why you'll better take notes as not to lose track - if you don't want to depend on a wiki while playing.

Shin Megami Tensei's combat system is fairly reminiscent of something like Pokémon. If you take advantage of a weakness or land a critical strike, you cause increased damage and extend your turn at the same time. But if you miss your target or your attack shows no effect, you lose an action and the opponent's turn will begin sooner. As the game progresses, our demons level up, learn new skills and some of them even evolve into different versions of themselves. Just be sure to prepare yourself for long grind sessions, because levelling up is no fast process.

In order to win new allies, you have to convince an opponent to join your group in the first place. It often depends on luck whether an isolated enemy gives in to your charm offensive (and your gifts), which is why the game introduces a few handy abilities that'll help in these negotiations. Still so, you will spend quite some time with this system, and there are some subtleties that the game does not explain very clearly.

You achieve further character progress within the Cathedral of Shadows, where you merge two or more demons with each other, in order to produce stronger creatures. By inheriting certain traits, extremely powerful fighters can be created with sufficient preparation. Since Shin Megami Tensei III: Nocturne has a stale level of difficulty you should definitely get to know this system in order to have a capable troop of fighters at your side that will fight for your ideals. While being presented differently, the Persona games still use the same mechanics as of today.

The base version of SMT3: Nocturne HD Remaster does not change anything in terms of scope or game systems, but the presentation has received some attention. The old PS2 graphics are now in modern HD, but environments and character models still look like 3D polygons that have fallen out of time. Language options in English and Japanese are partly available, but it's not on a level that has to be emphasised further. However, subtitle options in English, French, Italian, German and Spanish should make it easier for many Europeans to get started.

A function that proves to be particularly useful is the Suspend feature with which you can interrupt and end SMT3 at almost any time without having to search for a manual save point. In addition, Atlus provides free updates with added comfort functions and an easier level of difficulty at the time of launch. If you give the developers a little more money, you get access to a crossover character, as well as two other DLC dungeons that grant experience and money. This saves you a lot of time, which is rather unpleasant for buyers of the standard version.

Overall, Shin Megami Tensei III Nocturne HD Remaster is a very inconspicuous new release. The outdated game systems and the archaic presentation from the last millennium make it difficult to recommend the game to new players, although the story and its apocalyptic symbolism still know to inspire. If you want to take a journey back in time to the past of the SMT series, you will have the opportunity to do so on May 25. But if you are just looking for a new JRPG, you will find better options for the same money.

Shin Megami Tensei III Nocturne HD Remaster lands on PlayStation 4 and Switch this year in Japan while the rest of the world has to wait until 2021. 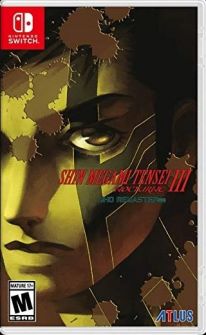