The Ukrainian developer Frogwares have been making Sherlock Holmes games for nearly two decades, and now, after a five-year hiatus, they are nearly ready to release Sherlock Holmes Chapter One. As the title indicates, the developer tries to give their own spin on Conan Doyle's famous detective by delving into his past, and the game is at the same time their most ambitious title to date as it is fully open world.

If you hadn't read our earlier preview (where we also explain some of the new gameplay mechanics) a short recap is in order. Back then we travelled to the Mediterranean island of Cordona and helped the young Sherlock solve his very first murder mystery by utilising a bunch of new investigative tools such as eavesdropping and a sort of mental scanner. With the criminal or perhaps an innocent person behind bars (you must figure out which suspect to accuse yourself), Sherlock, along with his old friend Jon, travelled to the grave of his late mother. Hoping to find closure, he was instead confronted with further mysteries.

During our first visit, Cordona seemed to be a fascinating place based on a few glimpses, and that initial impression was only strengthened after getting the chance to explore further. While the fictional island doesn't have the same size or wealth of activities as many newer open-world games from say Ubisoft, it still manages to impress with its realistic setting. While you might not find Cordona on any actual map, the developer tells us they had a clear vision from the start: "In-game it's we never actually stated, but we placed the island somewhere in the Ionian Sea, so wedged between modern-day Italy and Greece." Therefore, a lot of time was spent by the research team studying for example Venetian and Ottoman culture and architecture, which has resulted in some varied environments with each of the islands five districts having a very distinct style.

Sherlock Holmes Chapter One is set in the late 1800's, and, as Cordona is a part of the British empire, contrasts and sometimes clashes between different cultures and classes is woven into the very fabric of the society. The British functionaries work in sturdy brick houses and enjoy cool drinks in well-shaded restaurants while the local population, a melting pot of people from all over the world, sells goods in crowded markets or work in large mines and factories located on the outskirts of the island.

It takes a little while before you get a to see all the island has to offer, as the first case of the game takes place in a luxurious hotel where everyone is condescendingly polite and even the criminals wear suit and tie. But once the game really gets underway, the investigation leads us to some of the island's seedier places such as an abandoned workshop and a large Roman excavation site where local labour toils away under the not-so-watchful eye of a distracted British archaeologist. Often, Sherlock can blend in and obtain valuable information by wearing different disguises, which beside practical purposes also lets you customise the detective. In other instances, more corporal methods are required.

The combat in the developer's previous game, The Sinking City, was widely criticised for being too slow and clunky, and has therefore been completely overhauled: "We basically threw out the entire system and code we used for The Sinking City and started from scratch," the developer reveals. This has resulted in a dynamic system, where your only chance of survival is staying aggressive, either killing opponents outright or knocking them out through a flashy quick-time-event that at times looks like a mixture of MMA and ballet.

The non-lethal option is much preferred if you want to maintain cordial relations with your friend Jon but requires more work than killing as you have shoot off all the enemies' armour and then either hit an explosive bottle, conspicuously tied to their person, or use traps in the environments. Luckily, time slows down for a short period when aiming, highlighting lamps, barrels, and other objects that can be used to your advantage, just as when Sherlock is using his concentration ability during investigations. "We decided to have the combat be partially sort of a puzzle. Sherlock isn't just using brute force to gun down his foes but also his thinking and cunning," explains the developer.

Is the combat as amazing as the trailer seems to suggest? Far from it. Enemies are dumb as doorknobs, and the age-old trick of running in circles proves as effective as ever. But the flashy and cerebral combat style fits Holmes' character like a well-worn Deerstalker cap, and as a quick diversion from all the investigative work it's in my opinion most welcome. You can also disable it completely if you prefer. Personally, I liked it a lot and actually spent an embarrassing amount of time clearing optional bandit caves which earns you extra awards and money.

As mentioned, this is a sort of origin story for Sherlock Holmes, and early in the game you gain access to his old family mansion that still (barely) stands in one of the oldest districts of the island. All the furniture has long ago been auctioned off, but luckily the Holmes' sense of decoration apparently didn't appeal to the local tastes and so all their old possessions - along with some new improvements - can be bought back from the local dealers and used to improve the house. Of course, you shouldn't expect it to be Animal Crossing. But it still adds a little personal touch to the experience.

The same can be said for many of the objects and landmarks, you can discover on the island. These often reminds Sherlock and Jon about some past exploits or experiences, and to jog their memory you will often have to perform a small imaginative investigation where you reconstruct prior events. Other side quests are much more involved, and Frogwares informs us there are 40 hours of content if you explore everything - a bold claim, but not impossible based on our nearly seven hours spent with what seems to be a small chunk of the game. "While the side quests are optional and don't impact the main story's outcome at all, they aren't just filler content", the developer ensures. "A lot of them are packed with intricate and interesting lore connections where we created stories (essentially our spin on events) that led Sherlock to become the man we all know him to be in his later years." Frogwares also promises that some of the side quests will be nearly as long and complicated as what you encounter during the main story.

With better fighting, solid investigations, and a more varied open world, Frogwares seems to have improved the open-world formula introduced in The Sinking City in all the important areas. Yet there is also trouble in this Mediterranean paradise. The voice acting is a bit of a mixed bag, and while the visuals are decent there is certainly room for improvement especially when it comes to animations. I also felt that sometimes - despite the developers' intensions - the investigations were a bit too much on-rail, and at times I felt a bit bogged down by the many gadgets in Sherlocks mental toolkit.

I have no doubt that the game will appeal to adventure fans - after all, we are not often spoiled with huge open-world detective games - but whether it will have the necessary quality to appeal to a wider audience will only become clear on November 16 when Sherlock Holmes Chapter One releases on PC, Xbox Series X and PS5 with last-gen versions to be available at a later date. 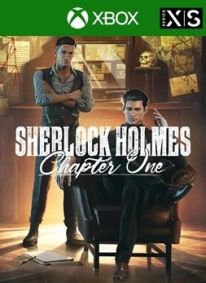