Two decades ago Yu Suzuki's Shenmue had hype behind it almost comparable to that of Red Dead Redemption 2 today. The leader of Sega's AM2 division, creator of OutRun and Virtua Fighter, had spent years working on his epic masterpiece, first planned for Sega Saturn and later released on Sega's last console, Dreamcast. It never managed to reach the audience it needed in order to justify the costs of development though, and soon after its Western release Sega gave up on Dreamcast and went into third-party development.

The sequel, Shenmue II, was something of a victim in this move, as Microsoft secured exclusivity for the game in North America for their new console, the original Xbox, and while the game saw release in Europe and Asia on Dreamcast, North America Sega fans never got to enjoy what was one of the last big games released on the console. Even if they got an Xbox in order to play it, they still had to wait an extra year too - not exactly the best way to set up the third game, and Sega never returned to the series. As you may know, Yu Suzuki is working on the continuation (for PC and PS4) without Sega, but the road to Shenmue III has been long and we've still got some way to go until its release next year (fingers crossed).

Good thing then that Sega has finally gotten around to remastering the originals for current generation consoles. The Shenmue games are a bit different than most classic and well-regarded titles in that they were designed (at least the first one) before the watershed moment that was GTA III, and while largely held in high regard, the praise wasn't universal at the time of the release. The almost legendary GameSpot review (7.8) comes to mind, but clearly Shenmue isn't something to everyone's tastes. It's a bit slow, the English voice acting is at times painful, and judged against today's open-world adventures they lack a lot of the conveniences we've come to expect. The camera movement is awkward, and so are character animations... it just feels decidedly aged playing it today.

Decidedly aged, but also surprisingly vibrant and full of atmosphere. We have to admit that it wasn't without a slight sense of dread that we booted up Shenmue for the first time in more than a decade, and while there are lots of things that are dated, it's also clear that as a whole the game has withstood the test of time. Switch the voices over to Japanese with subtitles, arm yourself with a bit of patience as you rotate steamboat Ryo into position to hunt for those elusive gacha figures, and take in the atmosphere, the sounds, the music; it doesn't take long to just slip back into the mindset we had when first played the games and we remember why we were captivated at the time. Sure, it's nostalgia at play, but that's the main reason for this release anyway.

The opening scene of Shenmue is as dramatic as ever with Ryo Hazuki returning home only to his father and a mysterious man called Lan Di in the family dojo. Lan Di demands a mirror from Ryo's father, and eventually he caves as Lan Di threatens to kill Ryo. Instead, Lan Di delivers a devastating finish blow to Hazuki-sensei's midsection, a killing blow as it would turn out. This is the start of an adventure that we're still waiting to finish, and you'll explore Yokosuka, take a job at the harbour (forklift racing!), and eventually export your save file and continue your journey in Hong Kong in Shenmue II. You'll learn that revenge is hard work, takes a long time, and require patience and good manners.

Shenmue offers a mix of classic adventure game where you need to ask questions, uncover clues, and carry out missions while managing Ryo's economy through odd jobs, and playing various mini-games spread out over the various areas you explore. Each area is pretty small by today's standards, but put together they offer a sizable world to interact with. Most characters have jobs and routines and move about according to the time of day, and Ryo has to keep time in mind as shops open and close and various characters may appear at certain times only. There's also fighting, a light version of Virtua Fighter if you will, a fairly slow and measured approach to combat.

There are some odd choices when it comes to the cutscenes that are presented with borders (we opted to play at 16:9 aspect ratio, but there's also the option for original 4:3). Regardless the cutscenes from Shenmue I will have black borders and so will the cutscenes in Shenmue II (above, below, left, and right). Clearly, this was a challenge the developers were not able to overcome, possibly because of how the original cutscenes were created. Naturally, save options have been improved (you can now save at any point), and while the low poly origins remain it's good to see that some effort has been put into the textures, at least some of them. Some faces look quite good, while others come across as the stuff that nightmares are made of. You'll no doubt wonder if the proprietor of You Arcade is himself or an alien wearing his skin as a suit (sorry about the Men in Black reference, but it's the same era). After all, this is a remaster, and while we dream of a proper remake of these games, we're still happy with the effort that's been made to bring the games over. There's certainly some degree of care and attention to detail that's gone into the options and the user interface, however.

After Shenmue was abandoned, Sega went on to create the Yakuza series, and it retained many of the features and quirks first explored in Shenmue. If you've grown to enjoy the Yakuza series, you'll want to see where many of its mechanics come from.

It's still hard to recommend Shenmue I & II to modern players with no connection to the franchise or appreciation for older 3D titles. It may simply be too chewy to really enjoy unless you've got a certain appreciation for the games of the early 3D era, but if you do have an appreciation for this period, and for Japan, Hong Kong, and the cultures you'll get a glimpse of as you guide Ryo Hazuki on his journey of discovery and revenge, then Shenmue I & II can most certainly be recommended. It's a piece of video game history that's worth digging into. You'll see.

Gamereactor UK
+
The atmosphere is still intact, Great mix of gameplay, Diverse and eclectic cast of characters, A chance to learn much about Japanese and Chinese culture.
-
There are parts that haven't aged as well as others, Cutscenes are plagued by black borders, Camera and movement aren't exactly up to today's standard.
is our network score. What's yours? The network score is the average of every country's score

"It's a piece of video game history that's worth digging into. You'll see."

And it looks a lot better than the HD collection.

Here's PS4 footage from Shenmue I & 2

We played both games on our livestream this week.

Shenmue, F1, and more are gracing our screens.

Sam is stepping back in time to look at Sega's classic.

Not to mention the all-important mini-games.

Meet the characters in Shenmue I & II

The latest "What is Shenmue?" feature released. 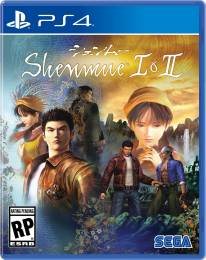