The number of indie games daring to move from PCs to consoles through the Nintendo Switch is increasing. Sheltered first saw the light of day on March 15, 2016 on PC, but two-and-a-half years on we're now seeing it on Switch to test whether console players are able to keep a family alive in a lost bunker in the middle of a post-apocalyptic world.

In Sheltered there's only one goal: to survive as long as you can. There is no story or thread to follow beyond what we want to imagine - how the protagonists got to their bunker, what the rest of the world looks like after the nuclear destruction, and so on. Broadly speaking, Sheltered is a survival and strategy game prepared, and thought out, so that the player can't survive too long.

The resources that appear in the scenario to keep the family alive are scarce and there is little chance that players will be able to create strategies good enough to spend more than 15 days without problems - at least during the first hours of play. In that sense, Sheltered is a cruel title that plays with our feelings like few games can, because in addition to constantly testing our nerves, it forces us to establish a strong connection with the characters (even though we can't even see their faces) before later snatching them away.

The game knows our family won't last long, but even so it allows us to personalise each and every one of the members that comprise it (two parents, two children, and one pet - the American Dream) just so that, when the time comes and there is no water, food, or medicine in the shelter, we remember that we were the ones who created these characters. Their names, their abilities, their clothes, and even their gender can be chosen - basically like The Sims, except that The Sims doesn't seek the player's desperation or keep them in constant tension to see if they can survive just one more day. By means of a construction table, or by crafting, we must keep our bunker supplied with all kinds of elements necessary for living, including showers, beds, toilets, rooms, electrical appliances, pantries, and so much more.

In addition to having a radio and exploring the outside, we also run the risk of having to face other survivors, although if they prove friendly then we can trade with others to get the resources we need. This also offers the possibility of being able to recruit more people to live with you in the shelter and thus establish a community in which it is easier to survive. However, it's never a good idea to let strangers into your comfy abode (if you've watched The Walking Dead, you'll know what we mean).

Within its visual simplicity, Sheltered is a game that gives the player countless possibilities to deal with the situation at hand, although at times players might find things repetitive, especially for those who aren't adapted to extreme resource management. As we mentioned earlier, it has no stories - the game is just about surviving as long as possible - so after a few failed runs (because, let's face it, you never get out of Sheltered alive) it can be a little bit complicated, since you'll always have to limit yourself to performing the same tasks over and over again, even if the order or methodology for carrying them out varies. However, the title has a couple more ways for the player to rest their survivor's mind, in the form of Surrounded and Stasis modes.

In the first, we're given a shelter that's already perfectly stable, complete, and packed with all the supplies that one would have always dreamed of having in your main start. The objective, again, is to survive, but this time from a group of attackers who want to kill you. It's a kind of Horde mode but established within the parameters of the genre and the minimalist essence of Sheltered. The second, Stasis, is something more complex. Your family have been cryo-preserved and wake up 60 years later, with the aim of building a rocket to abandon the planet - again with a perfect shelter, just like in Surrounded. This is an objective that sort of reminded us of Interstellar, and that turns out to be quite entertaining.

Sheltered is a complicated game that will remind mobile gamers of Fallout Shelter - a game with which it shares its aesthetics and its modus operandi. Resources are scarce, time is money, and good decisions have to be made in the creation of objects in order not to waste resources and save as many lives as possible. It'll be crushing at first, but it rewards those who persevere and learn from their mistakes, even if they might make a lot of them to start with.

Gamereactor UK
+
The strong connection it establishes between the player and its characters, So complete within its visual simplicity.
-
It can become boring in its first hours of play due to its high difficulty, For those who are not used to the genre, it can be repetitive.
is our network score. What's yours? The network score is the average of every country's score

Survive the post-apocalypse on PS4, eventually.

How long can you survive the apocalypse in Sheltered?

The setting and mechanics of upcoming strategy survival title explained.

Sheltered signed up by Team 17 after Kickstarter success

Publisher signs up a post-apocalyptic indie. 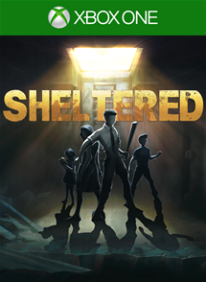