When revisiting a game like Shadow of the Colossus, the greatest challenge that faces its curators is knowing what to refine for a modern audience and what to leave exactly as it once was. Do you update, modernise, tweak and tinker, or do you respect the purity of the original vision and let it speak for itself when stood in the potentially harsh glare of unenlightened eyes? That was the task faced by Bluepoint Games, a studio known for its restorative work and which has taken extraordinary care in remaking Team Ico's PS2 original, rebuilding it from the ground up. And now, after playing it through on PlayStation 4 we have to say that, for the most part, the studio has done a fine job.

The first thing we should mention, because it's the first thing that will strike you once you've started up the game, is just how stunning it is. This remake is a thing of beauty, and the world that has been built to contain this adventure is as epic to behold as it is easy on the eye. Its footprint might not compare to those of more recent open-worlds like, for example, Los Santos, and by modern standards it might feel empty or even lifeless, but this is a like for like copy and these Forbidden Lands still hold unavoidable clues as to their true origins.

The in-engine cutscene that opens the adventure is elegantly put together - slow, methodical, measured - and the scene is brilliantly set for our adventure. Wander, our stoic protagonist, has ventured into this long-abandoned place and is trying to revive Mono, bringing her back from the dead. To this end he must kill the 16 colossi waiting for him out in the world, and so we venture out with his horse, Agro, in search of these mythical creatures.

Cue exploration of the wider world culminating in a succession of battles against the eponymous colossi, each one a puzzle to be solved and an enemy to be slain. It's a straightforward setup, and Shadow of the Colossus never really drifts far from that simplistic but accurate summary, which no doubt some people will find frustrating when you consider the wealth of distractions that any open-world game will lay on for a player circa 2018. For us, however, it's that single-mindedness that defines the adventure, making it both of its time and refreshingly atypical when viewed through contemporary eyes. After all, how many times have we played games that tasked us with saving the town/land/world/galaxy that were also happy to distract us with menial busywork along the way? Here the task is unapologetically direct: kill the monsters, save the girl.

Exploration is driven by what's essentially an elaborate game of Hot and Cold. When Wander is stood in the sunlight he can raise his sword aloft and, when he's facing the right direction, like focusing light through a prism, several beams come together to form a solitary trail of light that points you in the right direction. Shadows are used to spice your journey, and without your sword to guide you in darker areas you'll take one or two wrong turns, but it's not elaborate to the point where you'll get too lost. The location of each enemy is different, and getting to them can mean crisscrossing previous paths, but after you've seen all corners of the map you'll realise it's not quite as big as you thought it was at first, with the topography of the land also lending to the illusion that you're exploring a vast wilderness.

Once you've followed a cryptic clue and the more obvious beam of blue light, you'll eventually come to the area that will play host to your battle with the colossus that resides there. Each encounter is different from the last, and these huge, hulking creatures take many forms, each one requiring a different approach. These aren't battles against dwindling health bars, however, and it's probably more accurate to describe them as puzzles to be solved. Once you've worked out how to scale or mount the creature in question, using handholds to climb and sometimes clinging on for dear life, it's then a case of finding a weak spot - highlighted with a blue glow when your sword is equipped - and then brutally stabbing it with your blade. It's done differently every time, but essentially each encounter follows the same formula.

The repetitive structure will be a sticking point for some, but we think it works really well, further defining the individual appeal of this timeless adventure. For us, Shadow of the Colossus's core design, which loops exploration and puzzle-driven combat into manageable chunks, means it has aged extremely well. Helping ensure that it feels like an experience worth having in 2018 are the visuals, which are absolutely stunning. This grand world feels huge, and the imposing cliffs make Wander and Agro feel insignificant in comparison. The audio, from the crunching sound effects to the melodic themes that underpin the simple narrative, also helps enhance the atmosphere. It's not all great, though.

Perhaps the biggest issue is the controls. The turning circle when you're riding Agro is disappointingly huge, which can often mean your path forward is rudely interrupted by obstacles, which somewhat dampens the epic feel that you otherwise get from the musical accompaniment and visual splendour all around. It's frustrating because we've seen horseback traversal done very well in recent years, and we all know what's possible in this regard. Exploration is such a big part of the game, and more finesse when controlling your four-legged friend would have gone a long way to making this aspect even better. Many of the animations for Wander and his enemies look a little on the clunky side too, which in turn fractures the immersion during key moments, and the inconsistent camera doesn't help in this regard either.

Another thing that frustrated us was the amount of time we spent on the deck after being hit by a colossus. In certain circumstances that's practically a death sentence, or at the very least it's unwelcome friction that could be easily avoided by a slightly faster recovery time. On the whole, though, the puzzle-combat element is very well done, even if one or two of the colossus battles have solutions that seemed a bit fussy. While the majority are relatively straightforward and you'll only need the hints automatically offered after you've toiled for a time, one or two of them aren't as elegant and will have newcomers pulling their hair out (or heading online for a bit of help). Still, for the most part, the difficulty is pitched perfectly; you're made to work the ol' noggin, but usually not to the point of frustration.

The ending is both poignant and challenging, throwing a spanner in the works of what's a seemingly simplistic love story, and its impact will be felt long after you've put down the controller. Once you're ready to return there's the option to play a New Game+ if you want to up the difficulty or try and beat your best times on any particular colossus. There are four different control schemes, so you should find a setup that works for you. Most of the time it works well enough, and the way you hold the "grab" button to cling on for dear life is a nice touch that connects you with the action. You can't move and shoot your bow at the same time, which is a little jarring at first, but at least you can fire when riding horseback (so there is a workaround if you need to shoot-and-go). The more modern configurations feel up-to-date to a point, but there is also something decidedly old-gen about the way the whole thing feels. How happily you recall early 3D games and their many idiosyncrasies will largely determine how you feel about that.

If Shadow of the Colossus is an all-time favourite of yours, then you'll be pleased to hear that this rebuild restores the game to a very high standard. It's a beautiful yet sparse world, and the creatures that live there are truly magnificent in terms of their size and construction (the included camera mode and visual filters are great if you want to revel in their artistic design). The blend of combat, puzzle solving, and exploration makes for a memorable overall experience, but it's one that shows its age in a couple of key areas. Some people will find the archaic aspects frustrating, but we see them more as well-earned wrinkles on the face of a game that has aged with grace and style, standing the test of time on the one hand, and offering a distinct and refreshingly focused experience on the other.

Advertisements
Gamereactor UK
+
Looks incredible, has aged superbly thanks to excellent design, focused adventure.
-
Horseback riding isn't great, some of the animations and camera angles are a little clunky.
is our network score. What's yours? The network score is the average of every country's score

"It's a beautiful yet sparse world, and the creatures that live there are truly magnificent in terms of their size and construction."

Shadow of the Colossus is stomping onto PS Plus in March

And Sonic will race him there, with the blue hedgehog following up his cinematic success with another spin on PS4.

Charts: Shadow of the Colossus claims number one

We're checking out the remake of Team Ico's classic.

We reflect on Shadow of the Colossus in our video review

13 years after its initial launch, Team Ico's epic adventure is back.

Bluepoint hides an Easter egg in Shadow of the Colossus

We've come across something very interesting.

Watch the fantastic intro for Shadow of The Colossus Remake

Plus, we take down the first colossus!

Online
ActionJackson Edited on the 2nd of February 2018 at 15:05.
Classic gaming indeed but apart from the cosmetics which do look incredible, this was a frustrating game the first time round so no need for me to endure that again but as you guys rite fully say it is a glorious testament to gaming isn't it???.I still want to give 'The Last Guardian' a look but I fear the same will be evident there as well.It just doesn't seem nessassary do you know what I mean???
Whereas if Sony want to remake or rejuvenate legendary franchises like Crash Team Racing and update them, Spyro the Dragon and Syphon Filter then please I am ready and waiting ! p

Online
GR®
Mike Holmes on the 31st of January 2018 at 17:40.
There are some frustrating moments, but I very much enjoyed the time I spent with it. 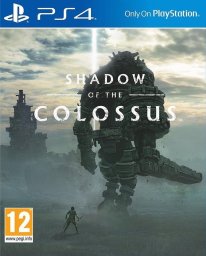