Croteam and Devolver Digital today announced Serious Sam 3: Jewel of the Nile. The expansion will feature three new campaign missions, and follows Sam to "the mysterious Temple of Isis on the island or Philae where a monstrous temple guardian lies in wait."

Davor Hunski, described as Croteam's "Chief Creative Guy," said: "Croteam is very excited about the reception Serious Sam 3: BFE received from our fans so we've worked really hard to make sure the Jewel of the Nile expansion tells more of Sam's story and cranks up the insanity."

Devolver Digital's Fork Parker contributed the following statement: "So does this island of Philae in Serious Sam 3: Jewel of the Nile have any topless beaches? The only thing better than fast-paced, over-the-top action is a perfect pair of digital flesh melons."

The new content is set to be released on PC in October, 2012. 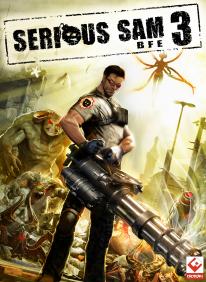